Why Do Suicides Jump in March? 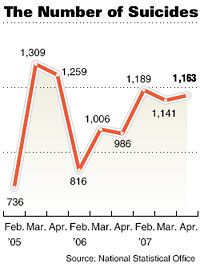 News of suicides come in everyday. Actress Jang Ja-yeon, who starred as one of the mean girls in the hit drama "Boys over Flowers" killed herself, Saturday. A university student was found dead, Tuesday, near the Han River in an apparent suicide. His family also said he was suffering from financial difficulties.

The suicide rate is generally high in spring, according to statistical records. "Spring is the season for a new start. Many people experience changes in their personal life and it might lead to a higher suicide rate", an official at the Korean Association for Suicide Prevention (KASP) said. "The current financial crisis is also pushing young people to their limits".

According to the National Statistical Office (NSO), the number of suicides jumps in spring. In 2005, 736 people killed themselves in February compared to 1,309 in March and 1,259 in April. Actress Lee Eun-joo committed suicide in February 2005 and it created a so-called Werther Effect, or copycat suicide. The trend continued without a celebrity's suicide in 2006 and 2007.

March, the beginning of a new semester, is the peak of stress for students in their teens and 20s. "Students consult the center on problems in human relationships and their desire to commit suicide the most in March", the KASP official said. "The stress caused by personal relationships is one of the reasons for Korean suicides. The change of hormones due to the change of weather and season also contributes to the increase in spring".

Korea lacks a healthcare system to help prevent suicide. Experts say the young generations need more prevention education since they are vulnerable to social difficulties that they have not experienced, such as poverty.

"Schools are too busy preparing for exams to educate students on suicide prevention. As these students get older, they might have higher possibilities of killing themselves", Nam Yoon-young of Seoul National Hospital said.