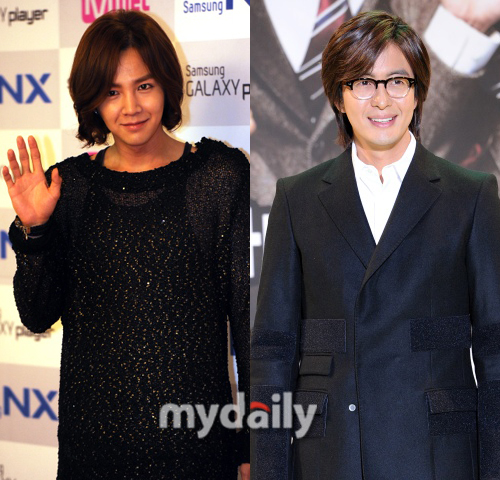 There is one star in particular who media from Japan and other countries visit when they come to Korea to cover news. That is Hallyu star Jang Keun-suk. The Japanese media spell out his daily life and documentary programs on him are being produced. His advertisement value in Japan is rising everyday.

The DVD rental number for "You're Beautiful" has exceeded "Winter Sonata", and other movies and dramas with Jang Keun-suk are getting massive responses. His fans are not the symbolic middle-aged class like typical Hallyu fans, but more of the younger 10~30s that lead the consumption of pop culture.

One common question everyone from Japan asked was if he could exceed Bae Yong-joon. As Hallyu focuses less on dramas or movies, it is redeveloping around K-POP.

Jang Keun-suk plays the important role of leading the charge to bring back popularity for dramas in Japan. He also has an upper hand regarding stealing the mantle of 'top Hallyu star' from Bae Yong-joon.

One way he can beat Bae Yong-joon is communicating with fans through his never ending work. Bae Yong-joon only did minor projects and didn't communicate with the fans after "Winter Sonata". There also have been criticisms asking whether he was a Hallyu star or a Hallyu businessman.

Jang Keun-suk kept appearing in dramas like "Marry Me, Mary!" and the movie "You Pet", even after having become popular for "You're Beautiful", and is planning to come back with the drama "Love Rain" next year. His constant appearance in dramas and movies means he is constantly maintaining his popularity. This is a different strategy compared to how other stars just settle with one or two projects succeeding in America.

Jang Keun-suk also has both talent and interest in music. He acts as a multi-entertainer and singer as well. These types of skills lend themselves to the development of cultural products.

On top of all that, his Japanese speaking skills are a great asset to be active in Japan and a weapon to overpower other Hallyu stars.

Also, Jang Keun-suk's way of happily walking into the arms of fans and the public, instead of acting mysterious by keeping space like other Hallyu stars, helps to establish a good foundation for long run.

"Why does Hallyu star Jang Keun-suk surpass Bae Yong-joon?"
by HanCinema is licensed under a Creative Commons Attribution-Share Alike 3.0 Unported License.
Based on a work from this source