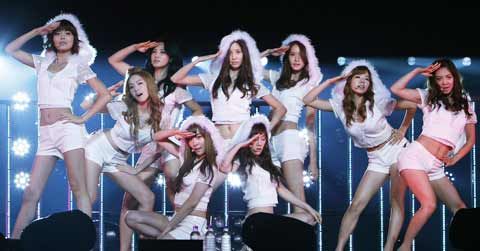 Korean girl groups are attracting more fervent admirers among their own sex in Japan than from the young men they are ostensibly manufactured to appeal to. About 80 percent of the audience at the debut showcase of Girls' Generation at the Ariake Coliseum in Tokyo on Aug. 25 were female, from teenagers to women in their 30s. Plenty of them even sported Girls' Generation outfits.

Things are much the same with other Korean girl groups like 4 Minute, Kara and Brown Eyed Girls. Management agencies admit that even though the bands were meant to target male fans, more than half of the fans are young girls. In Korea, girl bands have traditionally been popular among men of all ages, from teens to those in their 50s.

AKB 48 and Morning Musume are the leading Japanese girl bands this year. Dressed in frilly princess dresses and much given to winsome smiles, they dance and sing to routines mainly choreographed with dainty movements of hands and feet. But Korean girl groups have a bolder, more dynamic image. They wear angular uniforms or tight skinny jeans, and dance to choreography that uses the whole body. On stage, they appear confident and charismatic.

Thanks to their notoriously grueling training, Korean girl groups tend to be better at dancing and singing than Japanese ones. Members of Korean girl bands go through an average of three to six years of training, while Japanese girls get just six months to a year.

Oricon, the Japanese equivalent to charts provider Billboard, recently said Japanese girls in their teens and 20s are taking to Korean girl bands during a lull for Korean boy bands.