Will "Arthdal Chronicles" and "Vagabond" Come Back With Season 2? 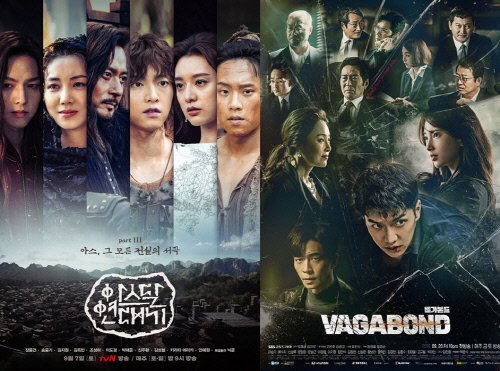 Will there be a season 2 of "Arthdal Chronicles" and "Vagabond"?

Among the most anticipated works in the drama industry in 2019 are tvN's "Arthdal Chronicles" and SBS's "Vagabond". The two series, which cost about 54 billion won (~$45 million) and 25 billion won (~$21 million) each, and gathered the production team and actors dubbed box office guarantee checkmarks, gained attention even before broadcast, and have achieved their desired results. They also raised expectations, leaving room for a next season, as we were faced with an open ending.

After more than four years of planning and a year of production, "Vagabond" has created a new Korean-style spy action blockbuster with powerful stories and lively characters. Although it is based on reality, special soldiers, NIS agents, lobbyists, and politicians intertwine with each other like a web to create a strong narrative, in which characters also live with their respective stories. Cha Dal-geon (Lee Seung-gi), who became an international mercenary in the final episode, shot Go Hae-ri (Suzy), who became an arms lobbyist, raising expectations for the second season.

"Arthdal Chronicles", which had a sharp divide in the beginning of the show, became solid in its worldbuilding and narrative as part 2 progressed, and the various seeds that had been sown sprouted and succeeded in changing the public sentiment on the drama. In particular, as part 3 was played, the drama gained momentum and was on the main track. It only showed the start of a vast narrative that still hasn't unfolded, raising expectations for season 2. The drama has only just begun to tell the bigger story until part 3, so it would be a shame if the drama was to end here.

Above all, both of these dramas have created a new IP (Intellectual Property) by building their own worldview and characters. This IP, which is not seen in other dramas, is the key to popularity and the formation of a loyal audience. A mega-drama, which challenges new genres, is investing a considerable amount of money in building such IPs. The high-end era of Arthdal in "Arthdal Chronicles" and the mercenary society in "Vagabond" were made possible through this kind of work, and the drama industry can grow together only when such IPs are developed through the multi-season system.

Of course, compared to the expectations before the show, the low popularity in Korea could be a stumbling block for such a work, and even if it starts production of the next season, considerable time will be needed to manage the schedules of top stars such as Song Joong-ki, Jang Dong-gun, Lee Seung-gi and Suzy. It is also true that there could be many variables, such as the will of the cast and the production team.

However, both dramas have not only been aired simultaneously in more than 190 countries around the world through video streaming company Netflix, but are being steadily consumed due to the nature of the OTT platform. Without simply relying on domestic ratings, the gap does not seem as significant as in the past, as the two contents are still ongoing around the world. In particular, only when the IPs are actively utilized and activated as multi-season dramas, can other great works be created in the future.

"The bigger the dramas, the more expensive they are in order to build their own solid world view and create diverse characters within them", an official from a production company said. "We need to actively utilize and activate the IPs of each drama made like this through the season system so that we can create better pieces with large investments in the future", he explained.

"Will "Arthdal Chronicles" and "Vagabond" Come Back With Season 2?"
by HanCinema is licensed under a Creative Commons Attribution-Share Alike 3.0 Unported License.
Based on a work from this source