Will college life be romantic and full of hopes for MBLAQ? 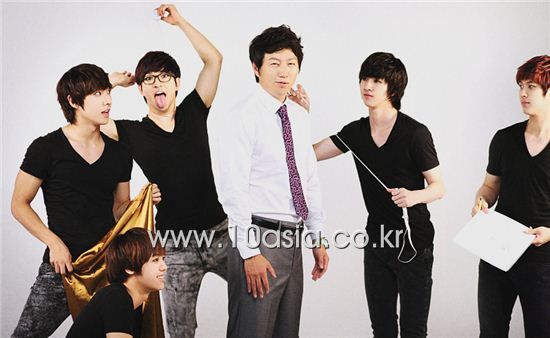 "I think I'd place first in the entire school, no in the whole universe, if Girls' Generation member Taeyeon taught me", boy band MBLAQ member Mir said quite seriously during an interview with the show's writer. That is when Yang Seungho, who had ended his interview with the writer without any particular request, said if he could go on a group blind date in college, he would like to do one with rhythm gymnastics majors. It is uncertain whether their dreams will come true but the boy band, the main cast to the last series of music cable channel Mnet's program on sending celebrities to college, were brimming with the excitment of romance and fantasy about college campus life.

Starting with "Seo In-young's KAIST", the desire that supported the series of this show was the involved celebrity's yearning for experiencing campus life. A discussion-based curriculum, club activities and group blind dates. Or rather blind dates, blind dates and more blind dates. Although the true nature of campus life may not be as great as one thinks, it cannot help being a space of dreams and romance for Sejong University Film Art major Yang Seungho who is on a leave from school, Lee Joon, G.O and Mir who have studied at colleges that provide Internet education instead of going to class. That is why none of the boys were able to hide the smile that is spread upon their faces as they shoot the title clip for the show in front of nothing but a blue screen. And as they finish taking their group shots, their mentor for the show walks in. It is not Tae-yeon. And it is not a beautiful female college student either. It is none other than actor Kim Soo-ro who played the role of a teacher in TV series "Master of Study". One can almost hear the dreams of the five boys getting shattered to pieces. Yes, college was a place for studying.

"Will college life be romantic and full of hopes for MBLAQ?"
by HanCinema is licensed under a Creative Commons Attribution-Share Alike 3.0 Unported License.
Based on a work from this source