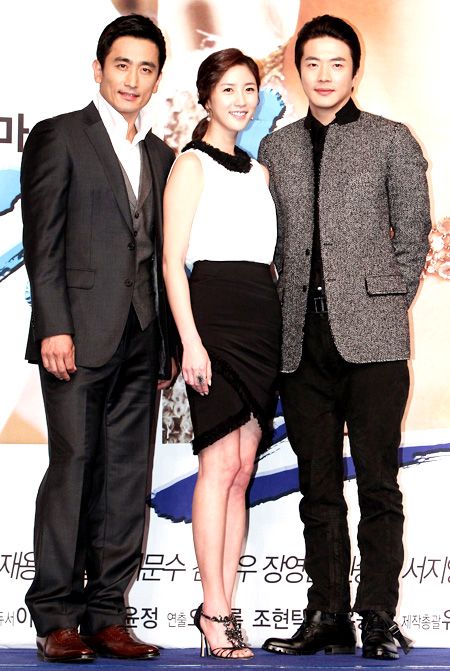 The year 2010 may be slowly coming to an end, but the local drama scene is hotter than ever. With KBS featuring the Rain-led "The Fugitive Plan B" and MBC relying on heartthrob Kim Hyun-joong's "Naughty Kiss", the Wednesday/Thursday slot is expecting fierce competition with a new SBS series "Daemul - Big Thing" scheduled for Wednesday night.

In terms of the storyline, it seems that the cartoon-based "Daemul - Big Thing" could manage to attract viewers with its "first female president" card, but viewers will have to wait and see if the actors will be able to live up to the expectations.

Seo Hae-rim, played by actress Go Hyun-jung, is a plain yet pretty anchorwoman but manages to make history as the first female president after the death of her war correspondent husband. The makers explained that the 24-episode series will be about an ordinary woman who becomes president: how and why she became head of state and also the complicated schemes and plots surrounding her, her presidency, allies and enemies.

"The drama made me realize how open we have become when it comes to themes. Working on politics was also worrisome, as it's such a touchy issue, and so we had to keep balance and harmony in mind at all times", said Oh Jong-rok, producer and the maker of the SBS drama "Style".

Among the numerous actresses in Korea, it would be rather difficult to pinpoint someone fit for a president, but it seems SBS managed to find the perfect match.

Actress Ko, who played the charismatic femme fatale Mi-shil in the hit period drama "Queen Seon-deok", will return as Seo and show off her charisma once again. The sticky part in this scenario is that the two characters ― Mi-shil and Seo ― are quite similar: outspoken, independent and stubborn. This may cast a shadow on Ko's ambitions, but the 39-year-old said that she was already aware of the worries.

"The moment I fall into carelessness is the most dangerous. I am trying to fully understand my character at all times and try to be attentive. I won't fall slack just because I'm used to such a headstrong character", she said. "Tell me when you think I'm getting loose", she added to reporters with a smile.

Finding pace may be a bit harder for fellow actor kwon Sang-woo, however, as the drama is the first after his hit and run incident that took place last June. The 34-year-old looked a bit nervous from the start of the press event, and before he said anything else about the drama and his character, he expressed his feelings on the incident for the first time after it happened.

"First of all, I would like to say I am sorry to have caused such a mess due to the accident", he said with a grim expression.
Ironically, Kwon will play the rags-to-riches character Ha Do-ya, who becomes a prosecutor.

It was evident that he was nervous in front of all the cameras and reporters, and when asked how he felt, he sighed and went on.
"I'm probably the most painful person on set and it's true that I have lost my confidence. But I came to realize that since I became known for acting, the foremost important thing would be showing myself through work", he said.

Another worrisome actor is Lee Soo-kyung, who will appear as the femme fatale curator Jang Se-jin. The 28-year-old actress looked as frightened as a deer at the press conference, probably because she has always appeared as stress-free, happy and bubbly characters in previous works, and it was evident that she needed a confidence boost.

"This is actually a very new challenge for me. The role is completely different from what I have been doing", she said.
Even fellow actor Cha In-pyo expressed his concerns, saying that she was trying hard to portray the dark and mean cold image but her eyes seem to be showing otherwise.

Different or not, this will be the chance for Lee to prove what she has as a serious actress and further open the door to more versatile roles.

Lastly, Cha In-pyo will appear as Ko's competitive congressman Kang Tae-san. Unlike the other three actors, it seems Cha is in for a treat, as he was not afraid to show off his charisma and play the part of the cold-hearted and ambitious character. The 43-year-old actor admitted that it was hard for him to fully understand and depict the character as he is already a congressman from the beginning, but he explained he tried to do his homework.

"I monitored some clips of the speeches given by the late president Roh Moo-hyun, but he didn't really fit my character. I got to watch some hearings by the National Assembly on my day off and I think all of the congressman appearing at the hearing gave me a vague idea of what I was going for", he said.

It will obviously take some time for viewers to fully appreciate the casts' efforts shown on the small screen, especially with Rain, Daniel Henney and Kim Jyun-joong stealing the spotlight on other networks. Hopefully, however, "Daemul - Big Thing" will be able to win the hearts of viewers with its cast and plot, marking a success for the drama featuring the first female president.
_____________
From left, actors Cha In-pyo, Lee Soo-kyung and kwon Sang-woo