Will film do justice to missing children case?

Poster for the upcoming film "Aideul" ("Children..."), which is based on an unsolved case involving five children who went missing in the 1990s.

A hushed yet most palpable tension marked the press conference Tuesday in Jongno for "Aideul" ("Children..."), ahead of its release next month.

It is because one of the country's biggest unsolved cases will be coming to life onscreen. In 1991 in Daegu five boys, aged nine to 13, went missing after setting off to search for frogs. Some 300,000 military and civilian personnel were dispatched, and the entire country grieved. It finally came to a close in 2006 when the statute of limitation ran out after 15 years, but the so-called "frog boys" have still not returned home.

Films such as Bong Joon-ho's "Memories of Murder" have previously tackled unsolved cases, but many Koreans felt a strong emotional attachment to the missing boys and the upcoming project was subject to questions about whether it was exploiting such an issue for the purpose of entertainment.

The filmmakers say no.

"The case itself is a tragedy - it was a huge event that threw the entire community into a state of panic. I'm sure it might have crossed the minds of other directors to turn it into a film one day. When the production company suggested the project, I wanted to know all the facts in order to adopt a specific perspective and draw a line between what was appropriate and not", said director Lee Kyoo-man.

"In the film - in this incident - there is definitely a criminal who murdered the children. While looking into the affair I learned that there were so many more underlying issues, incidents, stories and tragedies that were not revealed due to various circumstances at the time - such discoveries motivated me to make the movie". 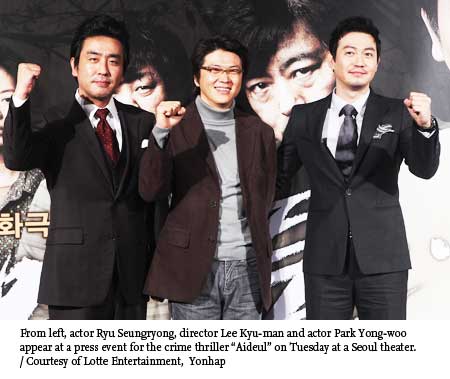 Lee, who made his debut as a filmmaker with the murder thriller "Wide Awake", said he was a college student when the news broke about the boys and remembers it very well. It took him three years to pen the script.

"It took a long time to write the scenario because it is a very fragile and sensitive issue, and it could end up entertaining some people while hurting others depending on the film's perspective. It's such a multifaceted subject that is very much raw and alive. In a nutshell, I listened to my heart for the movie".

Ryu Seung-ryong, who plays the role of a psychology professor that accuses one of the missing children's parents of killing them, had initially turned down the role.

"I thought the children's families must still be around and it would be a form of callous commercialism. But after meeting the director and the actual parents, who supported the project, I realized that it was about sharing their pain.

"I learned that it wasn't about picking at a scar but halving the grief by sharing it. The statute of limitation has expired on the case and people have forgotten about it. The parents stressed the importance of raising awareness on crimes involving children so that history does not repeat itself, and I wholeheartedly agree", said Ryoo.

Park Yong-woo plays the role of a documentary filmmaker who delves into the affair, initially driven by ambition and opportunism but later on becoming sincerely attached to it. Park said he was not interested in the actual incident; when he read the script he was drawn to its entertainment value rooted in the intriguing mystery and suspense elements. "The script was very entertaining... But while shooting the movie I learned many things I didn't know about the incident, so I came to have a sense of responsibility", said Park.

Despite the grim nature of the film the cast and crew members said that the filmmaking process was far from depressing, and a behind-the-scenes footage showed the actors having a good time. "It might seem like betraying the theme of the film, but we had a great time. We all shared a sense of responsibility and though the film is based on tragedy we were bound by team spirit", said Ryoo.

The film, distributed by Lotte Entertainment, is due to be released on Feb. 10.