Will KBS "Zombie Detective" Carry on the Popularity of "Producers"? 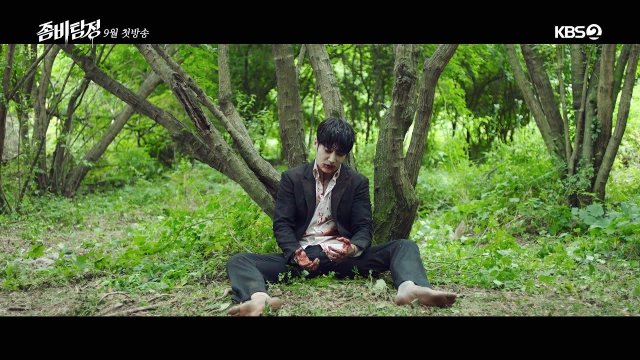 As "Zombie Detective" released a teaser video, it raises expectations even more.

KBS 2TV's new entertainment drama "Zombie Detective" is a human comedy drama in which a zombie in its second year of revival becomes a detective and struggles to find his past.

The fourth teaser video released captures Choi Jin-hyuk (Kim Moo-young), who runs through the dark forest with a look of enchantment with a monologue that says, "I don't remember anything". With the chill of the grass, "Who am I? Why I'm here. And where do I go?" Choi Jin-hyuk's voice evokes a sense of tension that makes his hands sweat.

Unlike his clear eyes, Choi Jin-hyuk's mouth is covered with blood, which is shocking. The body of an unknown animal appears in front of him and he reveals the 'humane beauty' of surprise to himself with his bloody hands shaking, maximizing the curiosity about the mysterious zombie Kim Moo-young.

It stimulates curiosity about the first broadcast about the real identity of Kim Moo-young, who travels between a human being with vivid consciousness, a zombie full of instinct and wild beauty, and how he will adapt to the human world after losing his memory.

"Zombie Detective" is an entertainment drama that connects "Old Miss Diary - Diary" and "Producers". It is the first original content that groundwave-OTT-IPTV collaborated with and was jointly produced and invested by KBS, Wavve, and SK Broadband. The second episode will be released on Wave and B TV every Saturday, followed by KBS at 9:30PM on Monday and Tuesday.