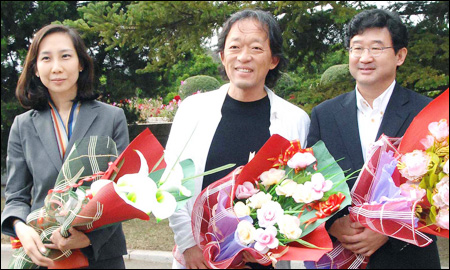 South Korean maestro Chung Myung-whun, center, receives a bouquet of flowers upon arriving in Pyongyang, North Korea's capital, Monday with two other South Koreans. He is expected to discuss a variety of cultural exchange programs with officials there. / Yonhap

Landing in Pyongyang on Monday, the music director of the Seoul Philharmonic Orchestra and a goodwill ambassador for UNICEF, will stay there until Thursday, during which time he will discuss with North Korean musicians a project to launch a musical education program for North Korean children and host an orchestral concert in the reclusive state, according to officials in Seoul.

Experts here don't rule out the possibility that he could meet with high-ranking North Korean officials to discuss relevant matters. They said any concert in the North, if realized, would help ease strained relations between the two nations - as seen in 2008 following the New York Philharmonic's historic performance.

Raising the expectation is that his visit came as the South and its allies have stepped up efforts to resume dialogue on the North's nuclear ambitions. North Korean leader Kim Jong-il has suggested a moratorium on nuclear testing and weapons production if the multilateral talks resume.

Before departing for Pyongyang, Chung said in a statement, "I'm pleased to get an opportunity to make the two Koreas closer with music". He added music is the strongest tool to promote peace.

The New York Philharmonic's performance in Pyongyang in February 2008 was widely viewed as a bold step toward the opening of warmer U.S.-North Korea relations.

The concert brought a "whole new dimension from what we expected", the New York Times quoted Lorin Maazel, the Philharmonic's music director, as saying in a report following the concert. "We just went out and did our thing, and we began to feel this warmth coming back".

The concert evoked other orchestral missions with diplomatic purposes, such as the Boston Symphony Orchestra's visit to the Soviet Union in 1956, followed soon after by a Philharmonic visit, and the Philadelphia Orchestra's trip to China in 1973.

In 2006, the Korean musician was invited to participate in a peace concert in North Korea as a conductor, but the event was called off after Pyongyang conducted a nuclear test that year.

Meanwhile, President Lee Myung-bak said during a panel discussion televised live on Sept. 8 that he was willing to have an inter-Korean summit on the condition that the North demonstrated its commitment to peace and ceased make further provocations.

Relations between the two Koreas have been tense since President Lee took office in early 2008 with a pledge to link aid to the impoverished neighbor to progress in efforts to end its nuclear programs. The already-frayed ties plunged to the lowest level in decades after the North committed two deadly attacks on the South last year.