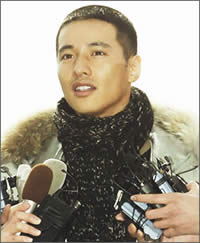 Korean Actor Won Bin Added to Elle Girl's Coolest List
Korean acting star Won Bin became the latest in a recent line of high-profile conscripts to present themselves for mandatory military service on Tuesday. Won (28) reported to the 102nd Army Reserves in Chuncheon. Looking slightly nervous, he emerged at 12:45 p.m. from a van, sporting a crew cut and khaki jumper. Some 400 reporters and fans had gathered to witness his arrival at the base.

"I expect to return with a precious new experience", Won said. Members of Won's fan club from Taiwan and Hong Kong as well as more than 100 Japanese fans were among those gathered. They had been waiting for him there from the early morning carrying gifts and photos of the actor and holding up signs that read "Come back soon", "Have a healthy military life", and "We will wait for your return".

After going through three or four days of physical tests, Won will be stationed at a division in rural Gangwon Province, where he will have five weeks of basic training before he starts on his 24-month military duty.

Meanwhile, on the morning of the same day, Grand National Party chairwoman Park Geun-hye paid a visit to the 102nd Reserves to encourage new recruits. She shook hands with each new conscript but missed Won, who arrived 15 minutes after she left.