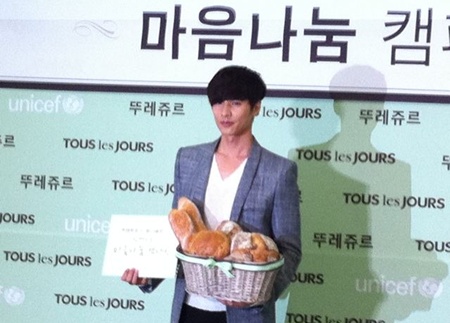 There was a Korean UNICEF "Sharing Campaign" treaty convention on the 13th. Won Bin took part in the event as the model as Tous Les Jours and UNICEF hosted the event together.

On the official Twitter for Tous Les Jours, a picture of Won Bin was uploaded with the writing, "His face is smaller than bread indeed". The picture was shaken up and not in good quality but still proved Won Bin's good looks.

Neatly dressed, Won Bin is holding up a basket of bread and posing for a picture. Those who have seen this picture say, "His features are clear even in this shaken up picture", "How can someone like this exist?", "He's not a human but God", "He became even more handsome while I haven't see him" and more.

"Won Bin, face smaller than bread"
by HanCinema is licensed under a Creative Commons Attribution-Share Alike 3.0 Unported License.
Based on a work from this source