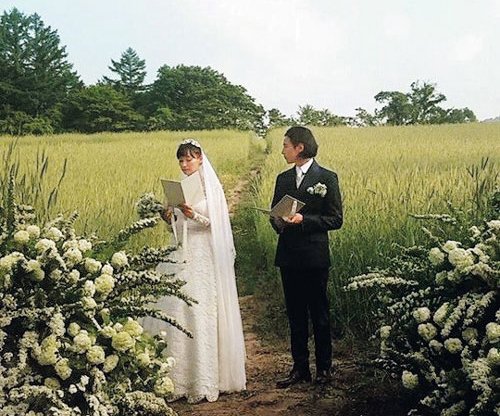 The small private wedding of top actors Won Bin and Lee Na-young in the groom's remote hometown of Jeongseon, Gangwon Province has been hailed as an example for others.

The simplicity of the outdoor ceremony appealed not only to those who think weddings are getting far too ostentatious but also to defenders of traditional values.

"It seemed even more beautiful to see millionaire celebrities having such a modest ceremony", read one online comment, while another said, "It's good to see a star not forgetting his families and his hometown".

The two actors decided early this year to have only family and close friends present in Won's hometown. Instead of a typical wedding procession, the two walked down a path surrounded by green wheat fields, and exchanged their own vows.

A friend of the bride officiated the ceremony along with five bridesmaids.

Only about 40 people attended. They shared typical Korean party food such as a bowl of noodles and pancakes prepared by the parents of the bride and groom.

The agency booked a small inn in Jeongseon a month ago for guests. The field where the ceremony took place belongs to the owner of the inn.

The owner said, "A man called me and said they want to film my guesthouse and the fields nearby. I didn't know it was for the wedding of Won and Lee until the day of the wedding".

"Won Bin's Quiet Countryside Wedding Strikes Chord"
by HanCinema is licensed under a Creative Commons Attribution-Share Alike 3.0 Unported License.
Based on a work from this source