Won Bin unveils photos from film "The Man From Nowhere" 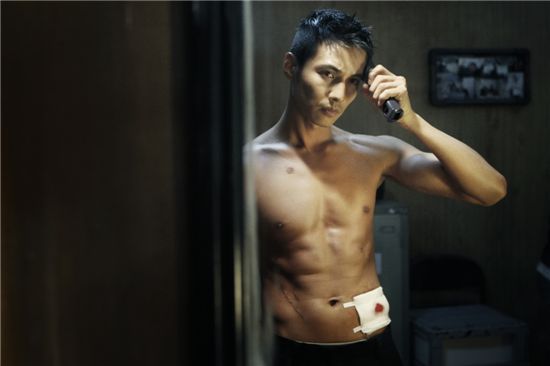 Top Korean actor Won Bin has unveiled pics from his upcoming film tentatively titled "The Man From Nowhere", which wrapped up shooting yesterday.

CJ Entertainment, which produced the film, released to the press several candid photos of the actor taken on the movie set, topless and sporting tight abs.

Won, who underwent rigorous workouts and a strict diet regimen for his role, shot his final scene yesterday which reportedly serves as a crucial turning point in the plot.

"The Man From Nowhere", directed by Lee Jeong-bum, is an action flick that tells the story of a lonely man (played by Won Bin) living in seclusion who comes out into the world again to save a young girl next door (played by actress Kim Sae-ron).

Won Bin debuted in 1997 with TV series "Propose" with his breakthrough role coming three years later in KBS drama "Autumn in my Heart", in which he co-starred with two other Hallyu stars Song Seung-heon and Song Hye-kyo.

He made his movie debut in "Guns and Talks" in 2001 and has not returned to television since. He was last seen in director Bong Joon-ho's critically acclaimed film "Mother - 2009" last year.

"The Man From Nowhere" opens in Korea in August.

"Won Bin unveils photos from film "The Man From Nowhere""
by HanCinema is licensed under a Creative Commons Attribution-Share Alike 3.0 Unported License.
Based on a work from this source