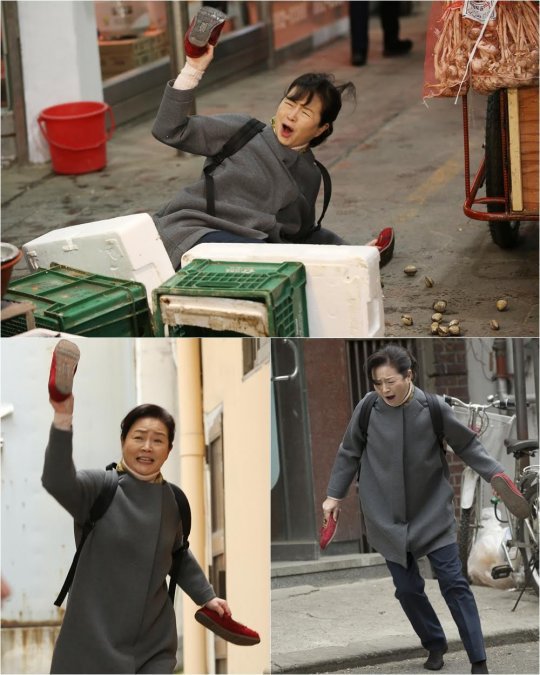 Actress Won Mi-kyung is starring in the new MBC weekend drama "Happy Home" and this is her first drama in 14 years.

She takes on the role of Bae Sook-nyeo in "Happy Home".

"Happy Home" is a family drama about Bong Sam-bong's family who started off with nothing and now owns the biggest Chinese Restaurant in Chinatown.

The stills of Won Mi-kyung show Won Mi-kyung running around the set barefoot despite the fact that it is winter. She seems to be calling after someone desperately.

In another picture, Won Mi-kyung has fallen down but in a comical way.

This scene was taken in a market in Incheon on the 29th of January. This scene is of Won Mi-kyung chasing after someone for the sake of her family's peace. Her 14 years of absence is almost unbelievable as she runs around with passion.

The weather was -3 degrees Celsius when the scene was made and for a better scene, she fell to the ground about 8 times.

Won Mi-kyung didn't mind getting roughed up for a good scene and worried about the well-being of others rather than hers throughout the whole time.

Meanwhile, "Happy Home" is directed Lee Dong-yoon and written by Jo Eun-jeong. The first episode will be broadcast on the 27th of February.

"Won Mi-kyung, first drama in 14 years "
by HanCinema is licensed under a Creative Commons Attribution-Share Alike 3.0 Unported License.
Based on a work from this source