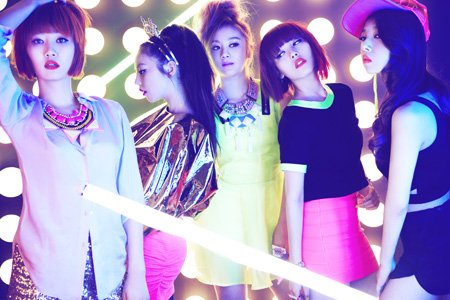 After releasing their six-track mini-album "Wonder Party", Wonder Girls said on Tuesday it is a truer reflection of their tastes and ideas than any of their previous releases.

"It was a kind of hip-hop we found after looking for something more free and unconventional", the five-member girl group said during a press conference at Seoul's Imperial Palace Hotel.

This new direction comes to fore in the track "Like This", which has already become the talk of the town due to its choreography and has topped various charts since it was released.

Ye-eun wrote two songs on the album herself, "Girlfriend" and "R.E.A.L".

Wonder Girls plan to continue their overseas activities in Japan and the U.S. in the latter half of the year after they stage their first solo concert in Seoul in three years, which will be held on July 7 at Jamsil Indoor Stadium.

"Wonder Girls Find Own Voice with 'Wonder Party' Mini-Album"
by HanCinema is licensed under a Creative Commons Attribution-Share Alike 3.0 Unported License.
Based on a work from this source