World Star Back on TV 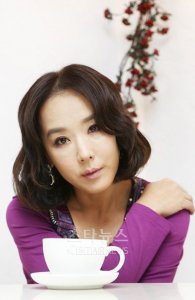 Veteran actress Kang Soo-yeon is back after a six-year hiatus with a new MBC miniseries, "Munhee". She will play the leading female character, Mun-hee.

"After reading the three or four page synopsis of the drama, I decided to star in it", Kang said Wednesday during a news conference at the Plaza Hotel in downtown Seoul. "I'm a huge fan of playwright Jung Sung-hee, and I like how the story portrays maternal love. It is different from his other work".

In the series, Kang plays the illegitimate daughter of a president of a big department store. Abandoned by her father, she has a baby at 18, whom she gives up for adoption.

Later she falls in love with a man, but her troubled past leads her to seek revenge on her birth father. But one day, she meets the child she once abandoned and learns about maternal love and forgiveness.

Was it hard for the never-married 40-year-old to play a role of a single mother with such a tragic history?

"It is hard. As I've never raised a baby, I can't say I absolutely understand what motherly love is. But I think I can understand my character's situation. I think I have to do all my best, which is all I can say now", Kang said.

The new drama is her second on the small screen after starring in the 2001 SBS historical piece "Yoin Chonha". But Kang proved her acting talent by winning the best actress award in the Venice Film Festival in 1986 and 1987. The veteran actress said it was challenging to play her teenage character in the recollection scene.

"It is a big burden for me, as many people seem to be interested in the scene where I play a high school girl in the recollection scene. I had no choice, and it had to be done by me. I hope people will focus on my current character rather than her teenage past", Kang said.

Regarding the theme of the drama, Kang said, "Love is a fundamental energy in our life, whether it is maternal love or love between a couple".

But when will her fans learn about her real-life love?

She dismissed rumors that she is celibate. She said she believes in fate.

"I've always wanted to get married. It's not that I don't want to or that I am celibate. I think marriage is fate. It's not something I can plan", Kang said.