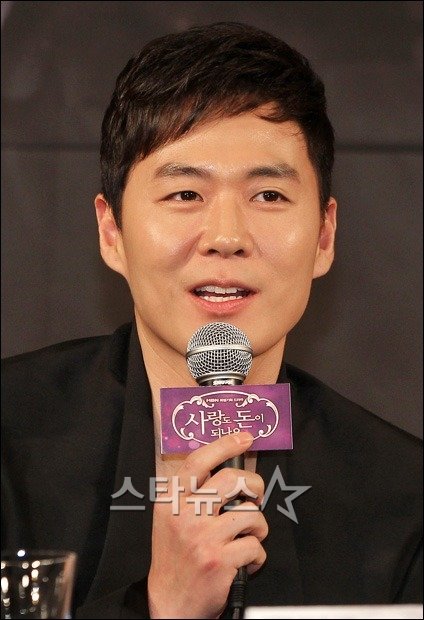 Actor Yeon Jung-hoon revealed that he didn't watch the MBC drama "The Sun and the Moon", which his wife Han Ga-in is currently starring in.

He mentioned this at the press preview of the MBN weekend drama, "Can Love Be Money?" on February 27th in Seoul.

When he was asked how he felt about her drama, he said, "I've never watched it. We usually don't watch each other's work. But I'm happy she's doing well and so is the drama".

He then continued, "I am busy to watch it. I do the housework then".

He said he was worried about running into his wife since the drama's are being produced by the same company.

Meanwhile, "Can Love Be Money" is about Ma In-tak (Yeon Jung-hoon), who thinks money is everything, getting involved in a scam because of his greed. The cast also includes Uhm Ji-won, Wang Bit-na, Jo Yeon-woo and more and is coming on the 3rd of March.

"Yeon Jung-hoon "I've never seen the drama my wife is in""
by HanCinema is licensed under a Creative Commons Attribution-Share Alike 3.0 Unported License.
Based on a work from this source