Yeon Woo-jin vs. Han Groo in "Marriage Without Love" 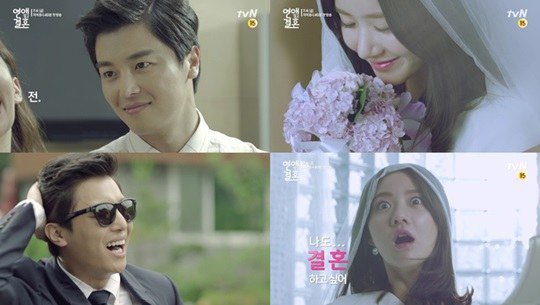 Teasers for "Marriage Without Love" have been released.

Yeon Woo-jin and Han Groo have gone through massive transformation for the new tvN drama "Marriage Without Love".

Unlike the serious roles Yeon Woo-jin played in previous dramas such as, "When A Man's in Love", "Arang and the Magistrate" and others, this time around, his role is very comical. Yeon Woo-jin is a man who hates the concept of marriage and introduces a woman he'll never marry to his parents, who keep pressuring him to get married. In the teaser, he can be seen doing exaggerated movements and laughing wholeheartedly. The anticipation is rising thanks to Yeon Woo-jin's character transformation.

Han Groo who starred in "Little Girl K", "Can We Get Married??" and others, is also highly anticipated in this drama. She's a character who is obsessed with getting married and appears beautifully in a wedding dress. She turns comical, too, and makes various expressions, from happily imagining herself getting married to being surprised about something.

"Marriage Without Love" crew claims, "With Yeon Woo-jin and Han Groo have been doing such a great job, we wondered if these characters actually existed in them. The teaser is only a tip of the iceberg".

Meanwhile, "Marriage Without Love" is a 16-part drama about a man and a woman with different views in marriage. Gong Ki-tae (Yeon Woo-jin) takes home a girl named Joo Jang-mi (Han Groo) whom he thinks will never be approved by his parents. Various rising stars have been thrown into the cast and the drama will be broadcasted on the 4th of July at 8:40PM.

"Yeon Woo-jin vs. Han Groo in "Marriage Without Love""
by HanCinema is licensed under a Creative Commons Attribution-Share Alike 3.0 Unported License.
Based on a work from this source