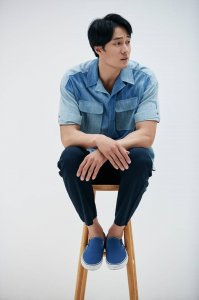 Director JANG hoon's upcoming Yeonghwaneun Yeonghwada (English translation: film is film) has been pre-sold to Japan's Phonicanon at the Festival de Cannes market. The film stars So Ji-sub who enjoys great popularity in Japan because of the hit television dramas "Something Happened in Bali" (Balieseo Saengin Il) and "Sorry, I Love You" (Mianhada, Saranghanda).

Like SO and KANG, director JANG's track record also lies mostly in television. In addition, he was Kim Ki-duk's assistant director on The Bow.

SO plays a gangster who meets KANG's character, a star actor who is tackling a gangster role. Filming is currently taking place and should end at the end of June. The film will be in Korean cinemas this fall.

"Yeonghwaneun Yeonghwada with SO Ji-sub pre-sold to Japan"
by HanCinema is licensed under a Creative Commons Attribution-Share Alike 3.0 Unported License.
Based on a work from this source