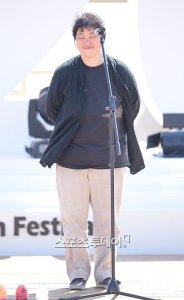 Korea's top woman filmmaker Yim Soon-rye, director of 2008's first local hit, "Forever the Moment", is back in 2009 with her fourth feature, "Fly, Penguin" which will have its world premiere at the 10th Jeonju International Film Festival in the Korean Feature Competition section.

The feature stars award-winning actress Moon So-ri, along with Park Won-sang, Park In-hwan and Jung Hye-sun  all of whom appeared in LIM's previous film "Forever the Moment". The new feature is the very first to be produced and sponsored by the National Human Rights Commission of Korea, known for its If You Were Me series of omnibus films.

"Fly, Penguin" is a human-rights themed tale that visits controversial sites in Korean society including the heavy burdens of private education on kids and their financially strapped parents, prejudices towards vegetarians, gender discrimination, and twilight divorce (divorce of couples in their 50s and 60s).

LIM emerged in the 90s with her award-winning short film "Promenade in the Rain" (1994), capturing prizes at the Seoul, Clermont-Ferrand, and Fribourg film festivals. Her feature debut "Three Friends" (1996) won the NETPEC award at the Pusan International Film Festival. Her second feature film, "Waikiki Brothers" (2001), played in major film festivals around the world. Her commercial breakthrough "Forever the Moment" obtained over 4 million admissions in just 37 days of theatrical release.

"Yim Soon-rye Returns with New Feature"
by HanCinema is licensed under a Creative Commons Attribution-Share Alike 3.0 Unported License.
Based on a work from this source