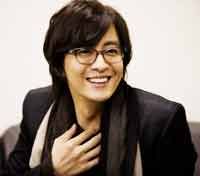 Korean 'hallyu' celebrities reach out to victims in cyberspace

Korean "hallyu" stars including actor Bae Yong-joon are expressing their condolences to Japanese earthquake victims via donations and Twitter messages.

The endowment is intended to provide displaced victims with first aid kits, meals and other daily necessities, said the agency. "Mr. Bae was very concerned when he heard how victims are under inadequate conditions, without enough food or water in this cold weather. He insisted that the cash gift be used first and foremost for emergency relief such as foodstuff, blankets and other essential items".

"My heart aches to hear about the increasing damage and aftershocks. I will look for the best way to help", Bae wrote on his official Japanese website Monday morning, prior to making the bequest.

Meanwhile, singer-actor Kim Hyun-joong also gave 100 million won to his Japanese agency DA, asking that it be used for aid relief. "It's a small sum, but I pray for a fast recovery and I hope it can help victims", he said. Kim returned safely back home Saturday from Japan, where promotional events for his TV series "Naughty Kiss" were cancelled.

Jang Keun-suk also offered 10 million yen (some 137 million won) to the Japanese Red Cross. It remains to be seen whether the actor's upcoming March 27 event in Tokyo, in which he was slated to meet some 20,000 Japanese fans, will take place.

A local rock festival will also make contributions. All proceeds for Rock Dog Korea 2011, which will take place in Hongdae V-Hall on Saturday, will be donated to aid relief.

In the meantime, Taiji, a former member of the popular Japanese rock group X Japan, will not feature in the event due to circumstances concerning the earthquake. Other programs in the festival will be held as scheduled, according to the organizers. The festival also plans to create a banner featuring messages from festivalgoers and send it to Japan.

Singer-actor Ryu Si-won told Yonhap News that he is composing a letter to Japanese fans and is thinking of ways to help victims, such as through a donation.

Many other stars are expressing their concern in cyberspace.

On Sunday, movie star Lee Byung-hun wrote messages of hope on his online website, while others shared their thoughts through Twitter. Boy band JYJ member Kim Jun-su, who returned from a photo shoot in Japan on Saturday, said, "Japan is our closest neighboring country, and their pain is ours. Let us pray all together as one".

Actor Park Shin-yang wrote messages in Japanese and English: "Can't believe what has happened to my friends of JAPAN! I'd like to send my deepest condolences to all the victims affected by the earthquake... and hope the aftershocks will calm down soon. Wish you all the best! GANBATTE!"

Park Joong-hoon, who starred in the local tsunami film "Haeundae", remarked that the disaster in Japan "is much more horrendous than the movie" and prayed for the victims.

Rocker Kim Jong-suh, whose family lives in Japan, informed fans through the social networking tool that his family is safe. "I hope there will be no more damage in our neighboring country", he wrote.