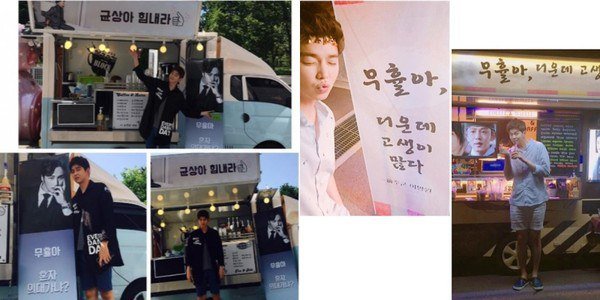 The three of them met in the drama "Six Flying Dragons".

Yoon Kyun-sang expressed his gratitude by posing cutely in front of the truck with a hair pin in his hair.

He added on the picture as he posted on Instagram, "I am going to make it through this heat without any mistakes". He is also stood in front of the picture of Moo Hyol and Lee Bang-won with a heart in his hand and also a banner that says, "Take care in this heat".

Byun Yo-han also sent a coffee truck after Yoo Ah-in's and showed a strong bond in their friendship.

The three have been good friends ever since meeting in "Six Flying Dragons" and have stayed in contact frequently.

"Yoo Ah-in and Byun Yo-han sends 'coffee truck' to Yoon Kyun-sang"
by HanCinema is licensed under a Creative Commons Attribution-Share Alike 3.0 Unported License.
Based on a work from this source