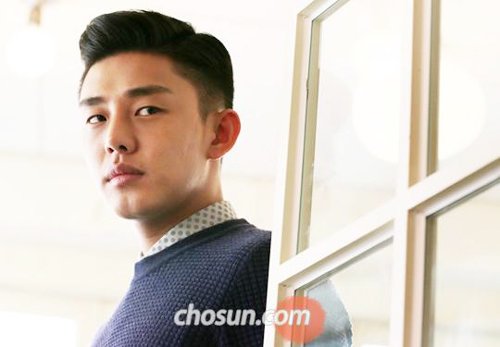 After his previous film about multicultural families proved a surprise box-office hit, Yoo Ah-in has stepped up a gear for his latest flick, in which he plays a tougher character but still hews to a similar theme of family relations.

In "Tough as Iron", scheduled to be released on Wednesday, he plays a pier worker in Busan who will stop at nothing to take care of his sick mother, who suffers from both dementia and a kidney disease.

The character looks like a slightly older version of the teenager Yoo played in his last movie "Punch".

When asked how he felt about playing a similar role, he said, "I used to be in a rush to play many different characters. But now I'm getting more comfortable and relaxed. I think I still have plenty of time to show various sides of myself".

"Creating and representing people's lives is my job. These days, people in their 20s are finding it hard to secure jobs and achieve their goals", he said.

"I also had a hard time worrying about my career and money, but thankfully now I have more money and time than my peers, and I try to invest my time and money to somehow help others, while also holding onto my dreams and trying to stay young at heart", he added.

"I plan on fully enjoying this period of my life, which will probably be my best decade. I've never imagined how things will pan out in the future. I just want to seize the moment".