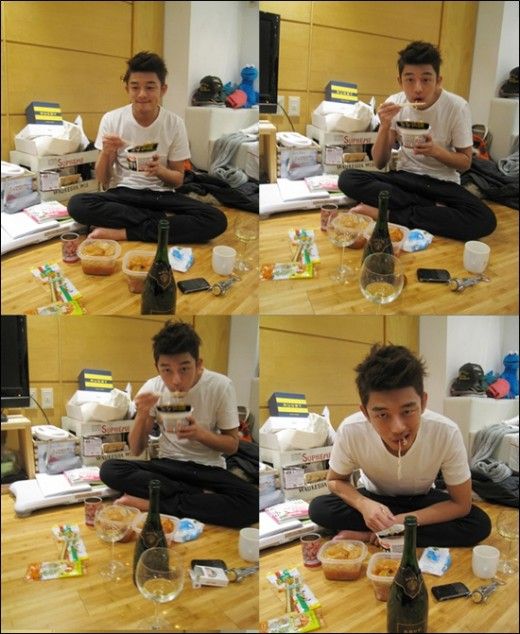 Actor Yoo Ah-in revealed a very free and easy going character of him wearing sweatpants and eating noodles. Yoo Ah-in wrote a message to his fans on his minihompy along with a picture of himself eating cup noodles on the floor under the title 'Here goes'.

In the picture, he shows many expressions like; smiling satisfied with a cup of noodles, surprised, staring into the camera with a very tough face with noodles in his mouth and such.

Yoo Ah-in, looking comfy in a white cotton shirt and sweatpants blends with the messy background. He also has a whole Tupperware of kimchi and a bottle of wine on the floor with him, feeling the air of the end of the year.

Netizen's who have seen the picture show responses like, "He's attractive whatever he does", "The never ending 'Gul-oh ache'", "His messy hair is cool", "He explains the noodles with his expressions".

"Yoo Ah-in reveals free image of eating Ra-myeon 'Cup noodles+kimchi+wine' mismatch"
by HanCinema is licensed under a Creative Commons Attribution-Share Alike 3.0 Unported License.
Based on a work from this source