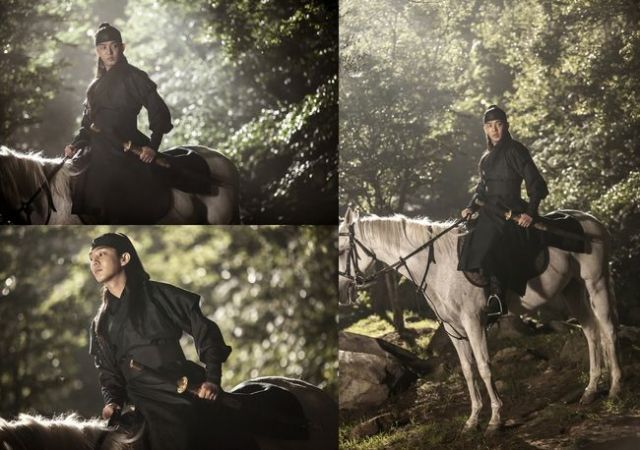 SBS's 25th anniversary special drama project, 'Six Flying Dragons', which is scheduled to begin on October 5th, is a fiction history drama based on the ambition and success story by the six figures with Lee Bangwon in the center, who established the foundation of Joseon together.

Actor Yoo Ah-in is returning to the small screen as Lee Bangwon, as one of the six figures, who lead the drama, while the drama is being highly anticipated by its potential viewers.

The still images unveiled by the production team of 'Six Flying Dragons' shows Yoo Ah-inon a white horse, who is staring somewhere, while holding horse reins in one hand and a big sword in another hand.

The dim light shining through the dense trees and the white horse create such fascinating and magnificent mood.

Yoo Ah-in's overwhelming and strong presence is the most eye-catching focal point. Although it is a still image, Yoo Ah-in's ability to bring out the charisma of his character Lee Bangwon, who becomes the third king of Joseon, is clearly evident. Yoo Ah-in is well-known for his ability to bring his character to life perfectly as if the character was custom-created for him only. People are paying attention as to how Yoo Ah-in's such special talent will portray the historical real person Lee Bangwon throughout the drama, who has been interpreted by many actors so far.

A staff rom 'Six Flying Dragons' said "Yoo Ah-in's first filming happened in August. His endless analysis of his character and his efforts assured the production team and staff members. We're anticipating much as to how Yoo Ah-in and other five flying dragons, Kim Myung-min, Shin Se-kyung, Byun Yo-han, Yoon Kyun-sang, Chun Ho-jin will create synergy together. We'd like to ask for much support for 'Six Flying Dragons, with its first episode scheduled to air on October 5th".