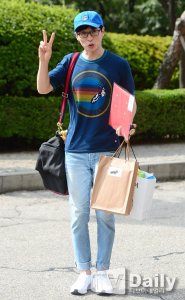 Popular comedian Yoo Jae-suk, nicknamed the"MC of the nation", is the most expensive entertainer at Munhwa Broadcasting Corporation (MBC).

Yoo earned 940 million won ($783,000) from the broadcaster last year, the largest amount among MBC entertainers, according to data submitted by Rep. Lee Jung-hyun of the Grand National Party to a broadcasting committee of the National Assembly.

Including his income from appearances on KBS and SBS, Yoo earned an estimated total of about 3 billion won.

MBC's top 10 most expensive entertainers accounted for about 22 percent of its total payment to those who appeared in its TV and radio programs last year.

"Yoo Jae-suk MBC's Priciest Entertainer "
by HanCinema is licensed under a Creative Commons Attribution-Share Alike 3.0 Unported License.
Based on a work from this source