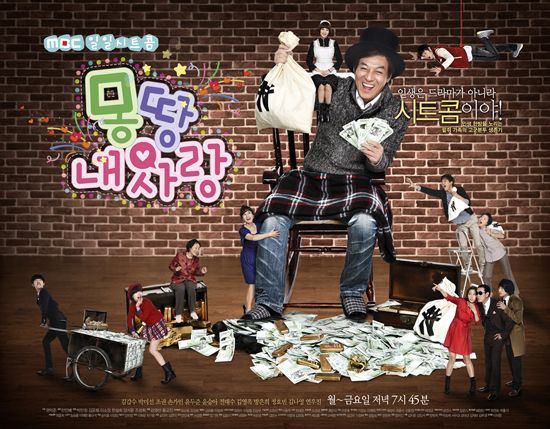 Official poster for MBC sitcom "All my Love" [MBC]

At the press conference for MBC sitcom "All my Love", each of its cast members told their own stories to the romantic relationships they get involved in within the show. Brown Eyed Girls member Son Ga-in and boy band 2AM member Jo Kwon, who played a make-believe couple in reality show "We Got Married" have re-united in "All my Love" as brother (Ok-yeop) and sister (Geum-ji), while actor Kim Kap-soo's lost daughter Yoon Seung-ah is set to get romantically involved with Jo Kwon. And Geum-ji will get entangled in a love triangle with Kim Kap-soo's mysterious assistant Jeon Tae-soo and Ok-yeop's friend Yoon Doo-joon. Below are excerpts from the press conference where they detailed the difficulties about shooting a sitcom and the incidents on set.

Q: You appeared in movie "Closer to Heaven" but this is your first time trying your hand at a sitcom. How has the acting been?
Son Ga-in: I wanted to try my hand at a traditional drama after I've really honed my acting skills when I'm older but I had no idea I'd appear in a sitcom. And the story didn't develop much in the beginning so I wasn't able to immerse myself into my role as Geum-ji or the incidents since I don't know what sort of person she is. But I think my acting has become more natural after trying to be more of myself. I've been having fun starting from the 15th episode and I think I'll be more natural from the 20th episode onward.

Q: How have people who have seen "All my Love" responded to your acting?
Son Ga-in: The members of my group [Brown Eyed Girls] say my acting is very funny and awkward. After watching the first two episodes, they told me I'm too conscious of the camera but that it's also addictive. I can't tell if that's a compliment or not. (laugh)

Q; Your acting was very realistic in the scene that you hit Jo Kwon. Do you actually have a brother?
Son Ga-in: I'm actually an only child. (laugh) I'll only get increasingly worse and hit both Jo Kwon and [Yoon] Doo-joon. But there are times when it says on my script: "Hit hard. Hit even harder". And at first I didn't know what it meant by "Kick the joint" so I had to ask. But it's actually better to get hit rather than being the one who hits. I have to look at how the other person feels, I feel sorry for that person and it's difficult to control how strongly you strike. The guys who get hit will say they're ok but how could they be? Of course it hurts. 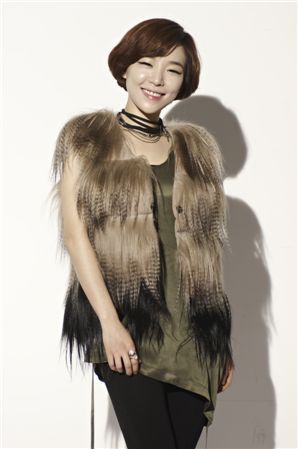 Q: You shot a kissing scene with Yoon Doo-joon yesterday.
Son Ga-in: It was the scene where Geum-ji is going into her house but Du-jun calls her back out and surprise kisses her. I was supposed to turn around when he calls out "Geum-ji" but I couldn't because I was embarrassed and even if I do, I'd hesitate and then step out of the camera's range. Also, only the back of my head was supposed to come out for that scene but the director asked to really kiss. (laugh) I wanted us to wrap up that scene quickly because we had already shot it for two hours so everybody was cold and I felt bad for the crew, but it was much more difficult to shoot that scene than I thought it would be.

Q: You get involved in a love triangle with Jeon Tae-soo and Yoon Doo-joon in the sitcom. What are each of their appeals?
Son Ga-in: It's already been revealed the Du-jun likes Geum-ji but not with Tae-su so she's thinking 'I think he likes me... or not?' And I think she'll end up clinging to Tae-su even if he doesn't end up becoming interested in Geum-ji. But Du-jun is much cooler so far. He'll take up a part-time nude modeling job to buy me a gift. (laugh)

Q: Your character is someone who obsesses over getting double-eyelid surgery. Have you actually considered getting it done?
Son Ga-in: Of course, and I think about it often. I'll look Into The Mirror and think about the different ways I could get it done but for now, I think it's too late. Maybe I'll try it when I'm in my forties. But my eyelids are actually not even the type that you can form fake double eyelids with. I recently shot a scene where I stick on a double-eyelid forming tape but it just stuck there without forming a double eyelid! I ended up having to replace it with just drawing a line. (laugh)

Q: You're an idol star with many female fans but your image is getting ruined playing a character whose feet stink and is a pervert. Are you okay with that?
Yoon Doo-joon: I'm okay with it although my parents and some of my fans pity me for it. (laugh) But acting is a new field for me so I'm having fun with the new opportunity I've been giving. Being an idol star isn't a big deal -- we're just 'young singers' and we're going to age as well so I want to keep trying hard at whatever I do while keeping that in mind.

Q: Your fans are going to be even more shocked when your kissing scene with Ga-in goes on air. How was it shooting the scene?
Yoon Doo-joon: It's not really a kiss, rather just a peck, but I was still embarrassed. Oh, but not on purpose! I actually wasn't that embarrassed but Ga-in was a lot. She kept asking whether we really had to kiss when only the back of her head was going to go on air for the scene. (laugh) It was rather Jo Kwon that troubled me... they do play make-believe couple.

"Yoon Doo-joon says will "somehow manage with nude scenes" - Part 1"
by HanCinema is licensed under a Creative Commons Attribution-Share Alike 3.0 Unported License.
Based on a work from this source