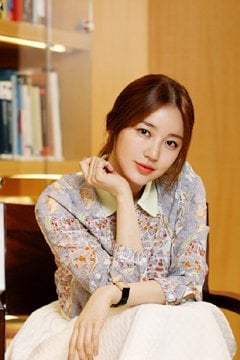 Actress Yoon Eun-hye, who debuted as a teenage member of Baby V.O.X. before making a successful transition to acting, said she feels much more confident about her career as she approaches 30 and becomes more established in TV soaps.

"When I was younger, I was very careful about everything because I was afraid of creating misunderstandings. But now I've shed all those anxieties, and I feel much freer than before", she said.

The MBC TV drama "I Miss You" was a turning point for her. In it, Yoon played a character who had been sexually molested as a child and had tried to bury the memories. She said she initially struggled with the complexity of the character's psychological issues, and found the experience so draining that she ended up in hospital with exhaustion.

However, viewers responded positively to her performance after she invested herself fully in the role, and she was able to overcome cynical critics who had previously questioned the limits of her acting ability, garnering rave reviews along the way.

"I've always wanted to play the kind of roles that were suitable for my age", she said. "The reason I've been looking forward to turning 30 so quickly is because I always expected it would open up a broader range of roles".

Meanwhile, her short film "The Knitting" was invited to the Busan International Film Festival last year, and she said the decision to challenge herself further by taking up film directing has helped her acting.

"I used to become very sensitive when I worked on projects, because I felt so personally responsible for whatever work I was engaged in, and this may have made life harder for those working with me", she said. "But directing a film with a whole production crew made me think that I may have been mistaken in behaving like that. I realized that I need to be more flexible in how I approach things, and that helped me feel more at ease and go more with the flow this time".

Despite only recently having wrapped up her latest production, she is already thinking about her next project. She said her confidence has been buoyed by all the positive reviews she has received and now she wants to show audiences what she is really capable of.

"I want to experience so many things, because that enlarges and improves you as a person", she said.