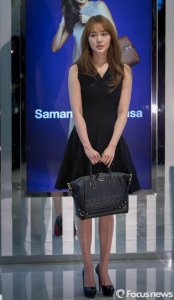 Few people would think of the now defunct girl band Baby V.O.X. looking at singer-turned-actress Yoon Eun-hye. In her third and latest drama "The 1st Shop of Coffee Prince" ("Coffee Prince") (following "Princess Hours" and "The Man of the Vineyard"), she solidified her acting talent, successfully pulling off her role as a tomboy pretending to be a man.

"I'm more attracted to unusual roles", Yoon says, "but of course confidence should come first. In all three dramas, my parts weren't necessarily a typical heroine. I'm working hard so I don't have any regrets". In the show, Coffee Prince is a coffee shop that hires only male waiters. Yoon plays Go Eun-chan who pretends to be a guy in order to get a job there.

Most viewers of course won't be fooled by Yoon as a "man". But she's still a lot of fun to watch, as Yoon studied how men act to play the role. To get that husky voice, she's said to have sung at the top of her lungs at a karaoke hall. "After I got the part, I keenly observed how men act and talk and practiced mimicking them. I thought it would be more effective on screen to portray more of a tough kind of fellow. On set, the crew just considers me a guy".

Choi Han-kyul, played by Gong Yoo, doesn't know Eun-chan is a girl and develops feelings for the person he believes is a boy. The drama tackles homosexual love carefully yet provocatively. "I never thought of it as homosexual while doing Eun-chan and Han-kyul's hugging and kissing scenes", Yoon says. "People say it's astonishing and shocking, but not for me. I'm a girl and Eun-chan is a girl, that's all".