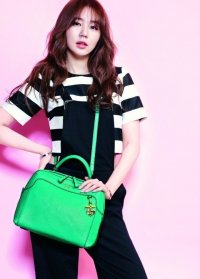 Singer-turned-actress Yoon Eun-hye has been offered to play a leading role in the sports film "Dunk" to be produced in Taiwan.

Based on the Japanese manga "Slam Dunk", the film will be produced with a budget of some 10 million US dollars, and Taiwan's leading star Jay Chou has already been cast as the male lead.

The offer seems to have been extended to Yoon because of the popularity she enjoyed in Chinese-speaking nations as a member of the five-woman group Baby V.O.X and through "Princess Hours", the MBC hit drama where she played a leading role.

In July, an AP report had said that pan-Asian star Boa would act in "Dunk", but her agency denied the report, saying, "No offers have been made to us, so we do not know anything about it. If we receive an official offer, we will consider it".