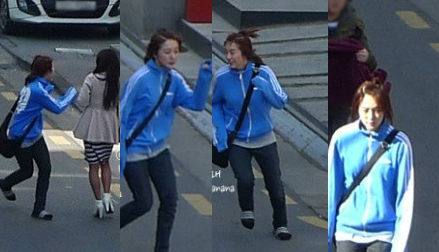 On an online community on the 11th, a picture from the new SBS drama "Lie to Me" shooting set came up. Yoon Eun-hye is Gong Ah-jeong who is rejoicing at the news that she passed in the public official state examinations.

In the picture, she is wearing a blue training suit and three white-striped slippers, with her bangs tied to the back as well. She looks like the free thinking image she had in "Coffee Prince" (2007).

Meanwhile, "Lie to Me" is about Gong Ah-jeong, in her 20s and complications in an unexpected situation and ending up becoming a married woman. It's a romantic comedy and it coming soon on the 9th of May.

"Yoon Eun-hye, trainers and slippers"
by HanCinema is licensed under a Creative Commons Attribution-Share Alike 3.0 Unported License.
Based on a work from this source