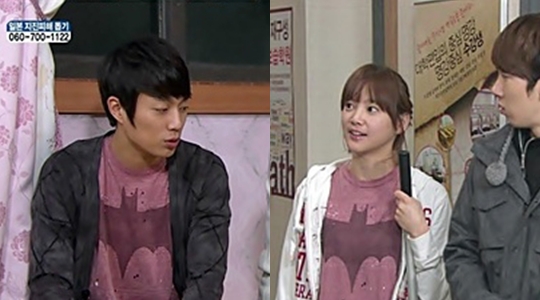 Yoon Doo-joon and Yoon Seung-ah from the daily MBC sitcom "All my Love" were spotted wearing the same T-shirts.

They were both wearing shirts with the batman print on it in different scenes.

Viewers wonder if there is a hidden episode behind that since they live in the same house in the drama.

Some netizen's say, "It's not a couple shirt", "Are they close enough to share clothes in the drama?" showing interest as to what happened, but their managements say it wasn't intentional.

Yoon Seung-ah's management N.O.A told Star News on the 7th, "The attire doesn't have anything to do with the drama, and they didn't wear them intentionally".

Meanwhile, as the truth at birth between Yoon Seung-ah and Kim Kap-soo is revealed, the drama predicts to become more interesting.

"Yoon Seung-ah and Yoon Doo-joon couple shirts? "Just coincidence" "
by HanCinema is licensed under a Creative Commons Attribution-Share Alike 3.0 Unported License.
Based on a work from this source