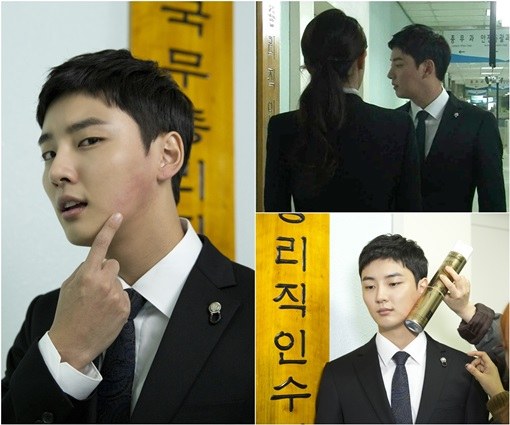 Behind the scenes cuts of the new KBS 2TV drama "The Prime Minister and I" were revealed.

Yoon Si-yoon, who takes on the role of Lee Beom-soo's (Kwon Yool) executive section head, seems like he's been slapped. Chae Jung-an (Seo Hye-joo) who's been with Lee Beom-soo since his PA days slaps the rookie, Yoon Si-yoon.

The picture shows Yoon Si-yoon's hard work. He's pointing at his red cheek to the camera which is funny but pitiful at the same time.

According to the staff, Yoon Si-yoon had taste of the slap during rehearsals and ordered a more extreme slap saying it wasn't hard enough. However, when the camera started rolling, he acted so that it looked really painful.

Yoon Si-yoon covered up his red spot with make-up and received an applause from everyone.

Meanwhile, "The Prime Minister and I" is a romance drama about a stubborn prime minister and a young woman who wants to marry him. To be aired on the 9th of February after "Marry Him If You Dare".

"Yoon Si-yoon slapped hard"
by HanCinema is licensed under a Creative Commons Attribution-Share Alike 3.0 Unported License.
Based on a work from this source