Who is the nest troika to take over Kim Tae-hee, Song Hye-kyo and Jun Ji-hyun?

However, it's been years since their generation started. They are still influential top stars today but it is also time to look forward to some new faces.

It is un-debatable, the reason why these three have been called the troikas of this generation. The first troikas were Jang Mi-hee, Jeong Yun-hui and Yoo Ji-in I the 1970s. Lee Mi-sook, Lee Bo-hee and Won Mi-kyung were the troikas of the 1980s and the 1990s were Kim Hee-sun, Ko So-young and Shim Eun-ha. Kim Tae-hee, Song Hye-kyo and Jun Ji-hyun were in charge of the millennium year. 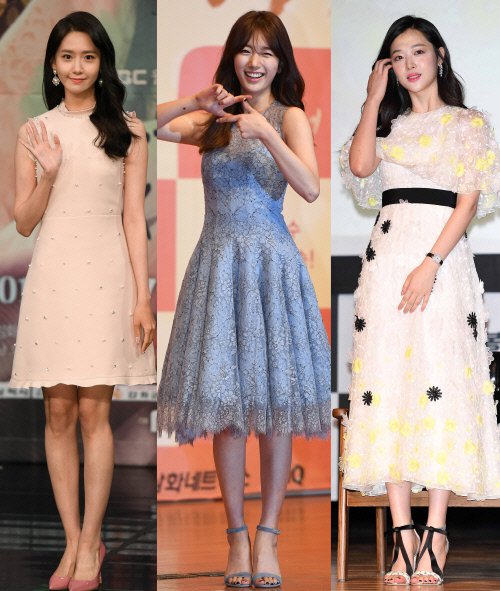 There haven't been many runner-ups, not even Son Ye-jin who has received several awards in the movie industry and Seolhyun from AOA but they aren't the troikas. The reason is that there are too many stars. People are less interested and it's hard to pick three stars that will take the place of the existing troikas.

The most often mentioned names are Yoona and Miss A Suzy. Their names are un-debatable as well. They are all beautiful and big stars but still, we are on the lookout for other cards.

A management director claims, "It's been a while since two of them made their debut and they have had some deduction to their reputation with scandals. They also have a strong 'girl group' image. It'll be better if we could find a new set of troikas among the rising stars. Park Shin-hye and Kim Tae-ri are more likely".

Another source said, "Some weren't sure about Han Hyo-joo and Lee Yeon-hee being actresses like Shim Eun-ha. They lost their chances by not doing so well in acting and as new actresses kept coming up".

Some say Suzy, Sulli and IU are competitors. They look young and innocent but they are sexy enough to get reactions from their fans.

"Yoona VS Suzy VS Sulli, the next Kim Tae-hee, Song Hye-kyo, Jun Ji-hyun troika?"
by HanCinema is licensed under a Creative Commons Attribution-Share Alike 3.0 Unported License.
Based on a work from this source