Yoona VS Yoori at the same time 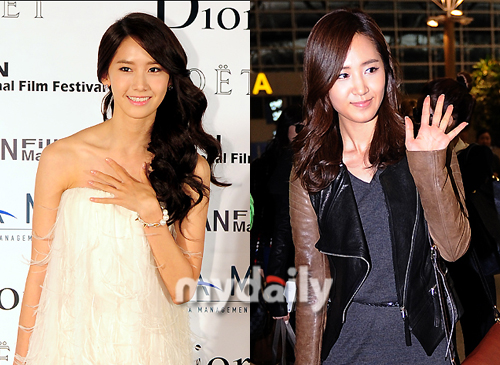 Girl's Generation members are going to be competing against each other.

Kwon Yuri will start off first with "Fashion King" on the 12th of March. She has beenin sitcoms before but this is her first actual drama. This drama is about humanity in youths who run and leap towards tomorrow and always challenge themselves to success and love at the same time although sometimes that leads to obsession.

Kwon Yuri is going to take on the role of fashion designer Choi An-na who has always lived a lonely life. She is someone who kept on running to become stronger to make herself look perfect in her hurtful life.

Although it is her first actual drama Kwon Yuri has landed herself on an important role. She said, "I am worried because of the character I am in the drama. I practiced hard. I hope you will like what you see". She departed for New York as soon as she landed in Korean after the group's Bangkok concert.

Yoona will come next in the drama "Love Rain" which will air 3 weeks after "Fashion King". This drama will portray the analogue love of the 70s and the trendy love in the year 2012. Yoona will star in this drama with Jang Keun-suk. This drama is a collaboration of Yoon Seok-ho and Oh Soo-yeon from "Autumn in my Heart" and "Winter Sonata".

Yoona is attempting at 2 roles. She is going to play the role of Kim Yoon-hee from the 70s and her daughter Kim Ha-na in the year 2012. Although they are mother and daughter, their different personalities make it a challenge for Yoona.

Although they are in the same idol group, Yoona has more experience in acting than Kwon Yuri. She has starred in dramas "Park Jung-geum, Heavenly Beauty", "You Are My Destiny", "Cinderella Man" and more.

Many are looking forward to the two dramas and who will lead in this friendly competition between two girls who are in the same idol group.

"Yoona VS Yoori at the same time"
by HanCinema is licensed under a Creative Commons Attribution-Share Alike 3.0 Unported License.
Based on a work from this source