You are invited to the special advance screening of Korea's steamiest new romantic comedy "Whatcha Wearin'?" 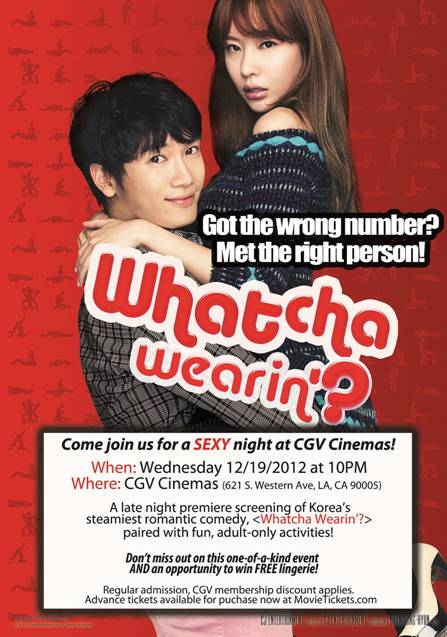 You are invited to the special advance screening of Korea's steamiest new romantic comedy "Whatcha Wearin'?"

Synopsis
After learning that his ex-girlfriend has a fabulous new boyfriend, Hyun-seung spends his nights wracked with insomnia and jealousy. Then one night, a phone call from a sexy stranger breathes new life into his gray existence. Even with her enviable looks and a successful boyfriend, Yun-jung feels love deprived. While attempting to spice up her relationship, Yun-jung resorts to giving her boyfriend a steamy phone call… only to find that the guy on the other end is someone else and she just can't quit him! A sexy and hilarious R-rated romantic comedy, "Whatcha Wearin'?" speaks to modern lovers and shows that sometimes, a little 'PS' just might do the trick.


It doesn't get hotter than this…
WHATCHA WEARIN'?