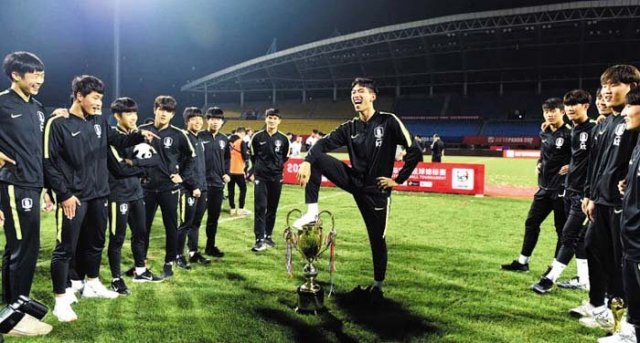 A Korean footballer puts his foot on the trophy after winning the international youth football tournament, the Panda Cup, in Chengdu, China on Wednesday in this photo posted on Weibo.

Korea's young footballers have been stripped of the winner's trophy following the Panda Cup in Chengdu, China which wrapped up early this week.

The incident comes after some of the Korean players who competed in the international youth football tournament engaged in insulting behavior while celebrating their victory in the medal-awarding ceremony on Wednesday.

They were apparently overexcited about their victory and some of them seemed to be unable to behave themselves, leading them to place their feet on the trophy.

A Chinese photographer posted photos of the incident on Weibo, the Chinese equivalent of Twitter. "One player even pretended to be urinating on the trophy, although some other Korean players tried to stop him. Unfortunately, I didn't get a picture of that", the photographer said.

The organizers of the tournament confirmed the incident and issued a statement saying, "The Korean players' action is an insult to the Panda Cup, its organizers and players from other countries, and a violation of sportsmanship".

The Korean players were forced to apologize for their misbehavior in the early morning hours of Thursday. Head coach Kim Jung-soo said, "I'm fully responsible for this incident. I feel sorry to hurt the feelings of the Chinese people".

"Young Korean Footballers Stripped of Trophy Over Bad Behavior"
by HanCinema is licensed under a Creative Commons Attribution-Share Alike 3.0 Unported License.
Based on a work from this source