Yu Jun-sang and Song Yoon-ah's "Graceful Friends", a Successor to "The World of the Married" 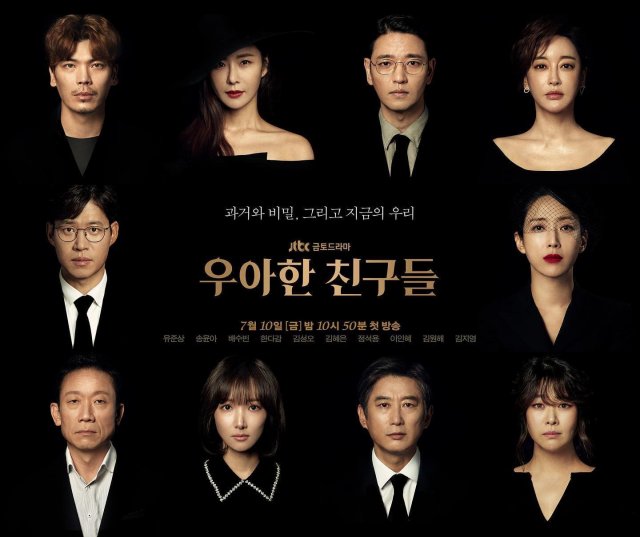 "Graceful Friends" is unveiled at last.

The new jTBC drama "Graceful Friends" released a teaser poster on the 26th and lit the fire of expectation. The mysterious aura of those whose expressions can't be read catches one's eye intensely.

Everyone has a secret they can't tell. "Graceful Friends" is a mystery drama about married friends of 20 years breaking up in their daily lives with the sudden death of a friend. The story of friends and precarious middle-aged couples who enter the halftime of life brings pleasant, yet thrilling suspense. It is another highly anticipated drama that connects "Itaewon Class" and "The World of the Married", which caused a sensation with 'all-kill' ratings and popularity. Above all, the "Graceful Friends" lineup, which creates trust in viewers just by the names involved, draws attention. The meeting of actors, including Yu Jun-sang and Song Yoon-ah, Bae Soo-bin, Han Da-gam, Kim Sung-oh, Kim Hye-eun, Jung Suk-yong, Lee In-hye, Kim Won-hae and Kim Ji-young, raises expectations for a well-rounded piece.

The teaser poster released on the same day further stimulates curiosity. We see ten friends who show up in the dark, and the calm expression behind their cool eyes is significant. The appearance of those in black suits, dresses and veils seems to imply death. Among these questionable mourners, the phrase 'we are the past, secret and present' amplifies the mystery. Who is hiding secrets with a perfect poker face?

The role of Ahn Goong-cheol, the center of the five best friends of 20 years, is played by Yu Jun-sang, who is active as an 'all-rounder' regardless of genre. An unexpected storm hits his life at home as an affectionate 'alpha-male' husband, who is recognized as the shrewd head of the company. Yu Jun-sang is expected to lead the story by vividly portraying his character's emotions and psychological changes with realistic acting. Song Yoon-ah, who will return to drama after two years, will play Nam Jeong-hae, a perfectionist psychiatrist and Ahn Goong-cheol's superwoman wife. She is chic, but she wants to be loved more than anyone else. Her performance will maximize immersion with her irreplaceable charm and delicate acting.

Bae Soo-bin will transform into the role of Jeong Jae-hoon, an unknown divorced man. He is a sensitive and tough urologist whose double nature is hidden behind a graceful facade, and is a key figure who causes curiosity. It is expected that Bae Soo-bin's unique gentle charm will create a 'life character'. Han Da-gam plays the role of Baek Hae-sook, everyone's first love. A dynamic story unfolds as she reappears 20 years after shaking the hearts of her five best friends in college.

On top of that, Kim Sung-oh, who shows off his unrivaled presence, invigorates himself as Jo Hyeong-woo, an adult film director and Kang Kyeong-ja's immature husband. Kim Hye-eun, who has a limitless acting spectrum, plays the role of Kang Kyeong-ja, a life veteran and Jo Hyeong-woo's girl crush wife, heralding the 'true chemistry' of older couples. Jung Suk-yong is an insurance company employee and Yoo Eun-sil's salary man husband, Park Choon-bok, who represents the funny reality of middle-aged people, and Lee In-hye shows her lovely charm as Yoo Eun-sil, Park Choon-bok's 12 years younger wife who is equipped with a killer eye smile. The indecisive civil servant and the righteous-life husband of Ji Myeong-sook, Cheon Man-sik, who entered the early stages of depression, will be played by Kim Ji-young and Kim Won-hae, respectively, adding to the drama's reality.

The production team of "Graceful Friends" said, "The realistic and pleasant story of middle-aged friends and couples who have their own secrets stimulates empathy and gives thrilling suspense at the same time. We are going to show a different genre of mystery. You can look forward to the synergy of the actors".

Meanwhile, "Graceful Friends" is helmed by Song Hyeon-wook and written by Kim Gyeong-seon, and it premieres on the 10th of July at 10:50PM.

"Yu Jun-sang and Song Yoon-ah's "Graceful Friends", a Successor to "The World of the Married""
by HanCinema is licensed under a Creative Commons Attribution-Share Alike 3.0 Unported License.
Based on a work from this source