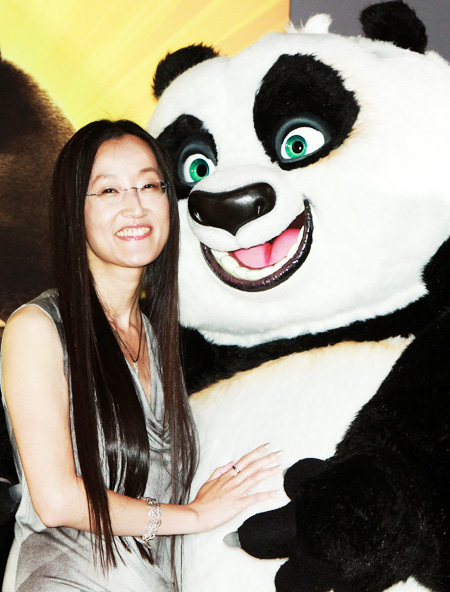 "Kung Fu Panda 2" director Jennifer Yuh Nelson poses with Po the panda during a press conference in Seoul, Monday. The Korean-American spoke about her being the first female director at DreamWorks. / Yonhap

Po the martial arts panda has returned in "Kung Fu Panda 2", and the sequel of the comic adventure sees more pronounced soul-searching themes under the wing of director Jennifer Yuh Nelson.

The first female and first Asian director at DreamWorks says she was able to bring a new type of collaborative leadership.

"Certainly one thing that was nice about being the first Asian female director was that there were no expectations of what I would be doing, about what my style would be, so I could make my own", Yuh Nelson told reporters in Seoul, Monday.

"The stereotype of a director is often a very loud-voiced male in the room, and I'm very soft-spoken so when I was in meetings with people (they had to lean forward to hear me). But I think that allowed people to feel safer and allowed us to collaborate better. It made a very smooth production and people seemed to have enjoyed working with me".

The Korean-American director entered DreamWorks as a storyboard artist in 2003 and went on to become head-of-story for the first "Kung Fu Panda" film, which won her an Annie Award. She says she was able to move up the corporate ladder because DreamWorks is a very upwardly mobile company.

"I think the reason why I moved ahead as much as I did is because the company itself very much encourages people working in any position to move up the ranks", she said, explaining that even a mailroom employee went on to assume an administrative position. "In my personal instance I happened to draw a great deal, and since I was able to draw so well I was useful to the production I was on. They just handed me this responsibility (to direct) so I'm very grateful".

The directing position required working closely with all the aspects of the production from animation to the music, or "living with the story for three years".

"I think it's very important to make a story that you believe in personally. I couldn't have made this film unless I really enjoyed the subject matter, and it was a film that hit me on an emotional level", she said. "So I would say for the sake of up-and-coming directors, find a story you want to tell because it's going to require all your strength to have it made, so find the courage and willpower to follow through". 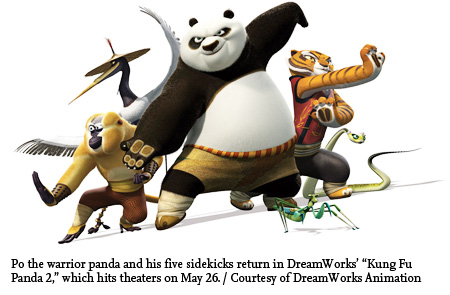 If the first film showed how Po turned into a martial arts warrior from running a noodle shop, the sequel delves deeper into the meaning of family and soul-searching as the hero must overcome a personal trauma to defeat a new villain.

"I think there is a great deal of meaning in the movie about trying to find your peace, and it's something that anyone can appreciate. I think going on a journey to find a quiet place within yourself, and being comfortable with who you are, goes across international borders and across animal species. It's something I'd like to do as well".

She also paid attention to make the 3D visuals less straining to the eye and tone down the violence for younger audiences. "These are soft, fuzzy animals that are fighting in very serious situations but there isn't any realistic violence. We tried to keep things warm and funny".

The film's fun factor stems from Jack Black's less-than-perfect Po, whose hungry stomach still growls louder than the sound of his punches.

"The antihero or the unusual hero I find far more interesting because they're more like everybody, more like us. If you have too perfect a character it's very hard to identify with them and I think the trend (at DreamWorks) may be trying to find a character that we can go on the journey with and feel their journey is something that helps us understand our own lives better. So those flawed characters that are sweet and interesting and not perfect just make more interesting stories".

She added how Black was very physical during recording sessions having done all the actual kicking and action for the voice. Angelina Jolie, who plays the tough Tigress, showed off her maternal side by bringing her children to the studio.

Regarding the possibility of a third "Kung Fu Panda" film, she said, "If Po has more to tell, there's plenty to tell about his character, and if audiences like him then I'm sure we'll keep going".

In the meantime the first-time director has no set plans about future projects and wishes "to go with the flow", including perhaps venturing into live action films one day. She is currently visiting relatives in Korea and watching local movies, among which the hardboiled action film "The Man From Nowhere" starring Won Bin particularly struck her interest.

"Kung Fu Panda 2" will be released in theaters on May 26.

"Yuh brings new sensibilities to 'Kung Fu Panda'"
by HanCinema is licensed under a Creative Commons Attribution-Share Alike 3.0 Unported License.
Based on a work from this source