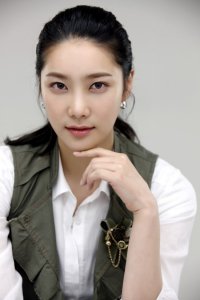 What makes the KBS2 drama "The Accidental Couple" more entertaining is its many unique supporting characters, including the two of Gu Dong-baek's bosses: the team's director (Yoon Joo-sang), with a signature laugh, and manager (Kim Kwang-kyu), a famous sycophant.

Park Gyeong-ae is another notable character who's drawing growing attention for her portrayal of a funny, vain office girl.

Dong-baek fell for her at first because she is known to be the most beautiful girl in the post office where Dong-baek works, but she hurt his heart by ignoring his feelings. But things changed when Dong-baek became married to Han Ji-soo (Kim Ah-joong). She started to feel jealous and one day kissed him when he was drunk.

In the June 4 episode, learning that Dong-baek and Ji-soo were married under a contract, Gyeong-ae dared to ask Ji-soo to help her debut as an actress in return for keeping a secret. Ji-soo promised to arrange an audition for her.

Yun Mi-joo, playing Gyeong-ae, is a rookie actress who made her name known due to her slim, well-proportioned body figure. But after she appeared on "The Accidental Couple", she got the nickname of "Chubby Gyeong-ae".

"I started to put on weight when I had to take a rest from an accident. I felt bad about the nickname at first because I still have difficulty doing exercise, as much as I want to lose weight, although I recovered from the injury", she said. "But I got to know that people gave me the nickname because they found my character lovely, so I now rather feel happy to have it".

Yeon expressed her hope to grow slowly to be a "great" actress. "I want to make acting my lifetime career, so I want to go step-by-step, doing my best at every moment and in any role".

The episode where Gyeong-ae will have the audition will air on June 10.