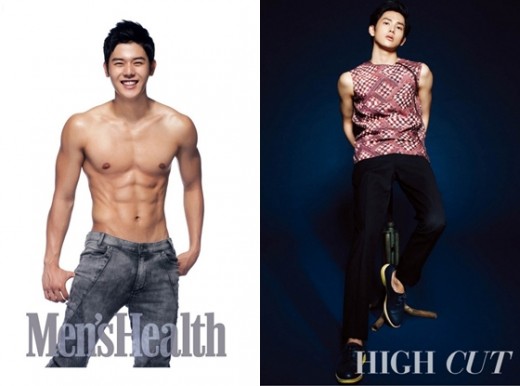 Two members of the group ZE:A - Children of Empire are the rising hotties.

There was a post on a portal site on the 5th titled, "Hidden hotties in ZE:A" along with pictures of Kim Dong-jun and Im Si-wan.

The pictures were images of the two in a High Cut photo shoot. The post received a hundred thousand clicks in an instant.

Kim Dong-jun became the uprising hottie through the "Men's Health" magazine which published him as a cheerful smiley guy with a unexpected twist in body.

Im Si-wan who has a face so tender just like any actress, showed off his muscles through the High Cut magazine.

Netizens say, "Kim Dong-jun looks like Han Ga-in but his body...", "Everything below the face is a surprise!", "Im Si-wan, I didn't know you had muscles" and more.

Meanwhile, ZE:A is currently focusing on practice while their come back date has been postponed due to unexpected injuries amongst the members.

"ZE:A Kim Dong-jun and Im Si-wan have hot bods"
by HanCinema is licensed under a Creative Commons Attribution-Share Alike 3.0 Unported License.
Based on a work from this source