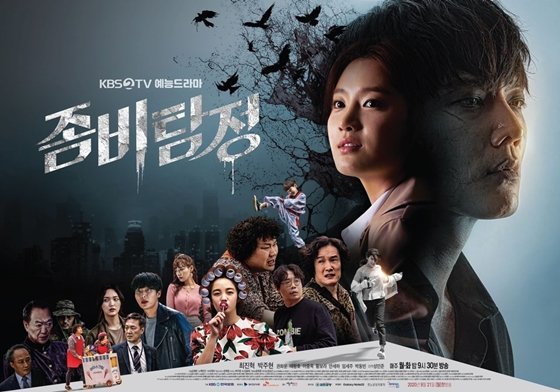 Choi Jin-hyuk and Park Ju-hyun's "Zombie Detective" is receiving enthusiastic responses regardless of the platform.

◆ The Differentiation of Entertainment Dramas

KBS 2TV's Monday-Tuesday entertainment drama "Zombie Detective" is receiving attention on the small screen as the next KBS entertainment drama that connects "Producers" and "Go Back Couple", conveying the full fun of genres ranging from comedy to action to thriller. Kim Moo-yeong (Choi Jin-hyuk), a new concept zombie who perfectly performs rap and comic dances and Gong Seon-ji (Park Ju-hyun), a human being with guts that can easily knock out even zombies, are making viewers unable to take their eyes off the screens.

It also adds to the rich attractions of the actors who boast unique presence and the feast of star cameos such as Yoo Jae-seok, Song Ga-in, Kim Min-kyung-V, Yoo Min-sang, Na Tae-joo and Oh Na-mi. With its bouncy production, sound effects and subtitles that appear in the right places, it has created a new concept of 'zombie material' that freely travels between entertainment and drama, satisfying the tastes of people of all ages.

"Zombie Detective" which opened the doors to a likeable zombie drama that anyone can enjoy comfortably, is generating a heated response regardless of ground-wave broadcasters, OTT and IPTV. On the first day of ground-wave broadcasting, it ranked No. 1 in real-time search terms across all age groups and it has been at the top of the list of search terms every time it airs, driving the fever that does not cool down. In particular, the eighth episode, which aired on the 13th, recorded its own highest viewer rating of 3.7% continuing its steady rise, captivating the small screen.

In addition, in the case of Wavve viewing time, which pre-releases two episodes every Saturday at 9:30 PM, two days before the main broadcast, it ranked second for two consecutive weeks from the first broadcast on Sunday, the day after the pre-release and first place on the third week.

"Zombie Detective" is the first success story among joint models of broadcasting companies, OTT and IPTV and has presented a new paradigm for terrestrial dramas. Viewers respond by saying, "I've never seen anything like this", "It's comedy, nonsense and thriller at the same time. It's a full set", "I had to hold in my breath" and more.