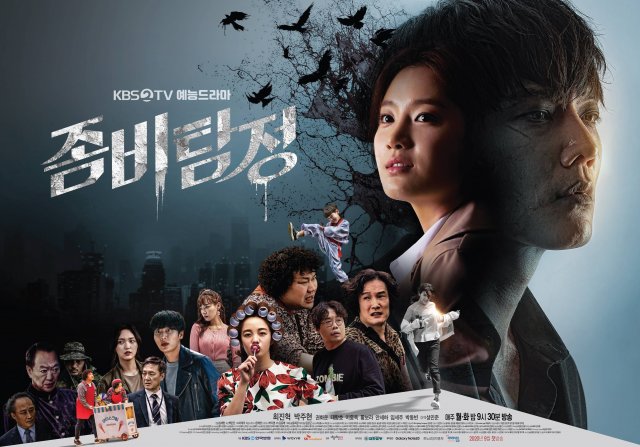 The poster of "Zombie Detective" is out.

The new KBS 2TV drama "Zombie Detective" is an entertainment drama about a zombie who was revived 2 years ago, changing his identity and struggling to survive in the human world.

The poster captures the attention of the actors who show off their different personalities amid the gloomy air currents created by crows flying over the city where darkness has fallen. Unlike its creepy visuals, Choi Jin-hyuk (Kim Moo-young), the 'zombie', gives off vivid eyes while Park Ju-hyun (Gong Seon-ji) looks unwavered and actors with different moods are combined to herald an exciting symbiotic story between humans and zombies.

Indeed, Choi Jin-hyuk, who suddenly appeared in the human world, intrigues prospective viewers on what story he will tell with the popping characters.

""Zombie Detective" Choi Jin-hyuk and Park Ju-hyun's poster"
by HanCinema is licensed under a Creative Commons Attribution-Share Alike 3.0 Unported License.
Based on a work from this source