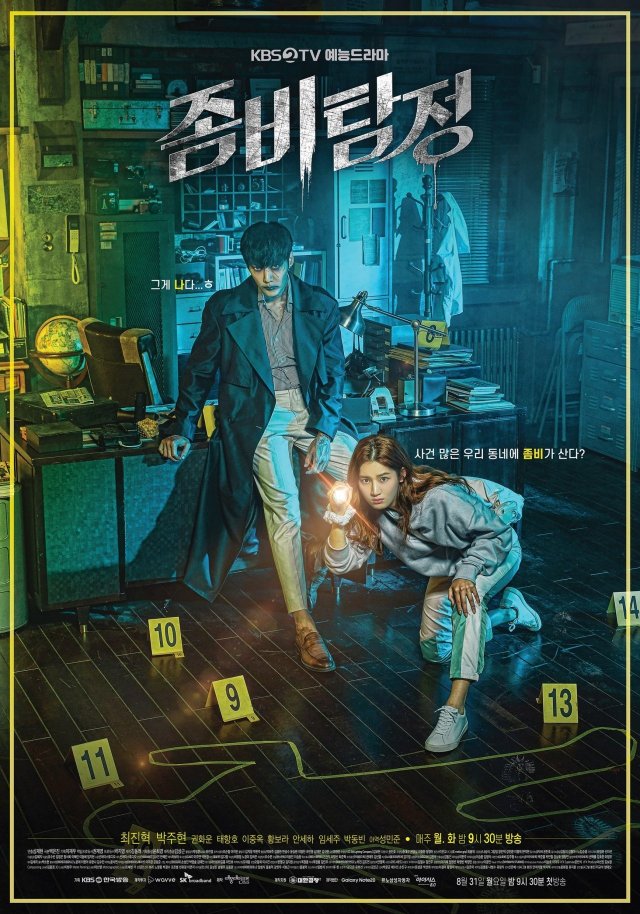 "Zombie Detective" is an entertainment drama about a zombie who was revived 2 years ago, changing his identity and struggling to survive in the human world.

The main poster, featuring the main characters Choi Jin-hyuk and Park Ju-hyun of "Zombie Detective", which will give the small screen a pleasant fun with unique characters and unpredictable stories, has been unveiled.

On the poster of "Zombie Detective" are Choi Jin-hyuk (Kim Moo-yeong), who is completely transformed into a zombie visual and gives off a strong look, and Park Ju-hyun (Gong Seon-ji), who is immersed in the investigation by shining a searchlight, are eye-catching. In the mysterious scene of an incident, which creates a gloomy atmosphere, the phrase "Zombies live in our neighborhood where there are many incidents" stimulates tension. The phrase "That's me", which contrasts with the creepy zombie visuals of "Zombie Detective" Choi Jin-hyuk, adds to the pleasant atmosphere.

In particular, the contrasting styles of Choi Jin-hyuk, looking dandy dressed in a coat and shirt and Park Ju-hyun, dressed in a plain sweat suit, herald the charm of different characters. It stimulates curiosity about how the two beings, who are 180 degrees different from their appearance to their birth, came to join hands and what kind of investigation will be carried out by the zombie and fearless human.

"Zombie Detective" will hit the small screen going back and forth from a scary thriller to a cheerful comedy. Expectations are amplified by the unpredictable chemistry that will create a perfect synergy between the two main characters.

Meanwhile, KBS 2TV's new Monday-Tuesday entertainment drama "Zombie Detective" which will premiere at 9:30PM on the 31st, is the first original content collaborated by terrestrial-OTT-IPTV and was jointly produced and invested by KBS, Wave and SK Broadband. The second episode of the drama will be released on Wave and B TV every Saturday, followed by KBS 2TV at 9:30PM on Monday and Tuesday.

""Zombie Detective" With Choi Jin-hyuk and Park Ju-hyun, "2-year Resurrected Zombie VS Fearless Human""
by HanCinema is licensed under a Creative Commons Attribution-Share Alike 3.0 Unported License.
Based on a work from this source