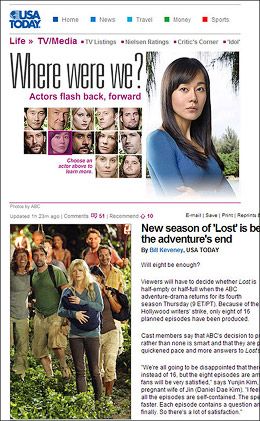 Friday's issue of the nationwide daily featured a photo of Kim on page one alongside a special report on the upcoming fourth season of the hit show.

The new season kicks off on Jan. 31. While 16 episodes were planned for the season, that number was halved due to a Hollywood writers' strike. The eight episodes were shot before the strike began.

"The shorter season is disappointing, but the eight episodes are really great", Kim told the newspaper. If the strike ends by mid-February another five or six episodes may be shot for season four.
___________________________________
USA Today newspaper featured a special article on the upcoming fourth season of the hit TV series 'Lost', starring Korean actress Kim Yunjin. /Newsis