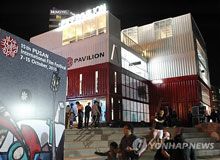 This year's Pusan International Film Festival will open on Thursday evening for a nine-day run.

The opening ceremony will be held at an open-air cinema at Suyoung Bay in the port city at 7 p.m. and will be hosted by actor Jung Joon-ho and actress Han Ji-hye.

The film festival, in its 15th year, will show 306 movies from 67 countries. Half of all the films shown will be world premieres.

The films will be screened at five cinemas in Haeundae and Nampo-dong.