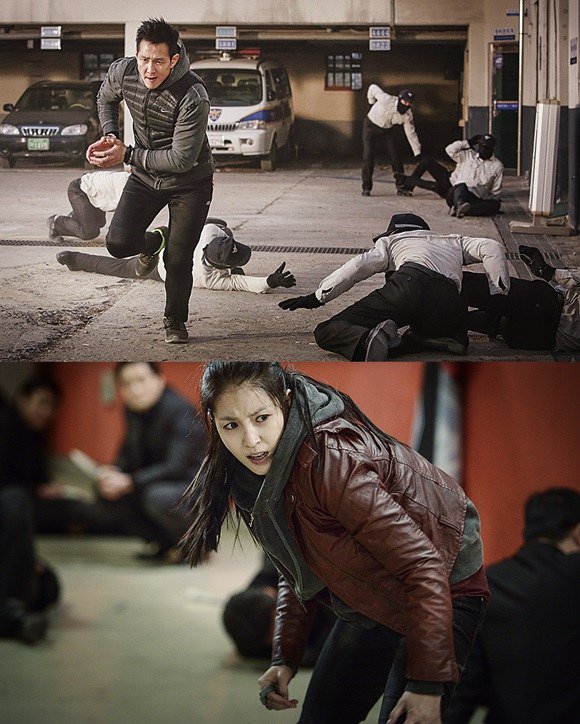 Both Lee Jung-jae and BoA went through special training for the movie "Big Match".

"Big Match" is an action movie about Ik-ho (Lee Jung-jae) who fights to save his brother from an evil villain. The action is directed by Park Jeong-ryool from "The Stranger".

Director Park put emphasis on Ik-ho and wanted his MMA fighter to stand out from normal action and show heroism in his moves. For this, Lee Jung-jae had to train for 5 months, learning how to fall, roll and all the other basics first. Then he mastered boxing, wrestling and other various kicking moves.

In the mornings, Lee Jung-jae would work on his muscles and practiced martial arts in the afternoons. Director Park said about the actor, "Lee Jung-jae smelled like plasters and that's how hard he worked. He has much potential as an action star".

BoA, in the role of Soo-kyeong, a mysterious red angel, joined the martial arts team and worked on her strength, boxing, attacking, falling and rolling every 2~3 times a week. She even had personal boxing lessons with a trainer.

Amazing daner BoA is born with the passion for action moves and Park says, "BoA learns quickly and she's better than any stunt actress".

""Big Match" Lee Jung-jae and BoA go through special training"
by HanCinema is licensed under a Creative Commons Attribution-Share Alike 3.0 Unported License.
Based on a work from this source