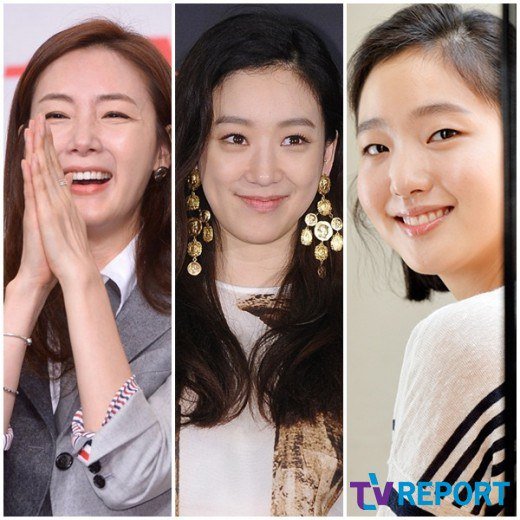 All actresses and writers are gathering to tvN. They are all coming back with cable. They chose work over viewing percentage. They have been thirsty for quality and this time they held hands for a better filmography. It's a rush of actresses in their 20s, 30s and 40s. Kim Go-eun is back with "Cheese in the Trap", Jung Ryeo-won with "Bubble Gum" and Choi Ji-woo with "Twenty Again". Who will be the one to laugh?

She's back. She's attempting at the best character ever. She is a mother with a 20-year-old son and a wife of a professor as well as a freshman of 2015. She has to play 3 roles.

Choi Ji-woo is starring in her first cable drama. Her character gets pregnant at the age of 19 and becomes a mother. She then decides to go to school at the age of 38.

Ha No-ra (Choi Ji-woo) has the spirit of an old lady and is pure and innocent. We can trust her with the melodrama. She opened the doors to Hallyu with "Stairway to Heaven" and "Winter Sonata" and has earned the title, 'Melo-queen'. She also appealed as a bright and cheerful character in the tvN show "Three Meals A Day".

"Twenty Again" also signals the comeback of writer So Hyeon-kyeong. She wrote "My Daughter Seo-yeong", "Prosecutor Princess", "Shining Inheritance" and more. She opened up a second chance to many with her work and this time she's going to create synergy with Choi Ji-woo.

Jung Ryeo-won is coming back with "Bubble Gum".

"Bubble Gum" is a grown-up fairytale with the message that if people worked together to fill each others' hollowness everyone would become happier. Jung Ryeo-won plays Kim Heng-ah, a radio producer who is best friends with hospital director Park Ri-hwan (Lee Dong-wook).

They previously starred in the 2003 sitcom "Live Right" and have reunited for the first time in 12 years.

It's been a tough competition. Kim Go-eun was lucky to have landed a role in the new tvN drama "Cheese in the Trap" and not her competitor, Bae Suzy. However, it's too early to be happy.

With only four months left until the first episode is on air, the attention for the drama is appalling. The original "Cheese in the Trap" is famous enough to bring about a fuss with every episode. Kim Go-eun plays Hong Seol, a junior to mysterious Yoo Jeong, played by Park Hae-jin.

With the demand for the original so high, everyone is waiting to see how they make the drama. While fans of the original say that Park Hae-jin is a perfect match to the role of Yoo Jeong, about Kim Go-eun they say, 'we'll wait and see'.

Kim Go-eun appeared in 2012 with the movie "A Muse" and has been doing well since then but this time it won't be easy. Kim Go-eun is going to have to work especially hard to earn the favor of the original fans.

"Choi Ji-woo, Kim Go-eun, Jung Ryeo-won all on tvN"
by HanCinema is licensed under a Creative Commons Attribution-Share Alike 3.0 Unported License.
Based on a work from this source