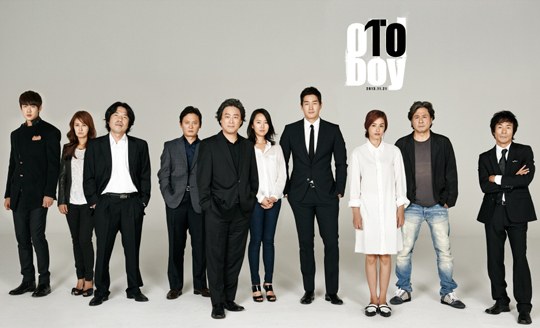 A picture of the cast of "Old Boy" was revealed.

The re-mastered version of the 10 year old movie is being released once again and everyone got together to take a picture to celebrate the 10th anniversary.

Park Chan-wook in the middle, Choi Min-sik as Oh Dae-soo, Yoo Ji-tae as Lee Woo-jin, Kang Hye-jung as Mido, Kim Byung-ok as the security director, Oh Dal-soo as the cell chief, Lee Seung-shin as the hypnotist, Yoo Yeon-seok as younger Woo-jin and the suicide victim Oh Kwang-rok gathered together.

The schedule was revolved around Choi Min-sik who is departing for a movie on the 1st of December and got together on the 23rd of October to take this picture.

Like a high school reunion, everyone got together and talked about the happenings from 10 years ago and celebrated the 10th anniversary of "Old Boy".

The fresh version of the movie was re-mastered by Park Chan-wook himself and will appear much more detailed and clearer than the 2003 version.

"Choi Min-sik, Yoo Ji-tae, Kang Hye-seong and more, reunited in 10 years"
by HanCinema is licensed under a Creative Commons Attribution-Share Alike 3.0 Unported License.
Based on a work from this source