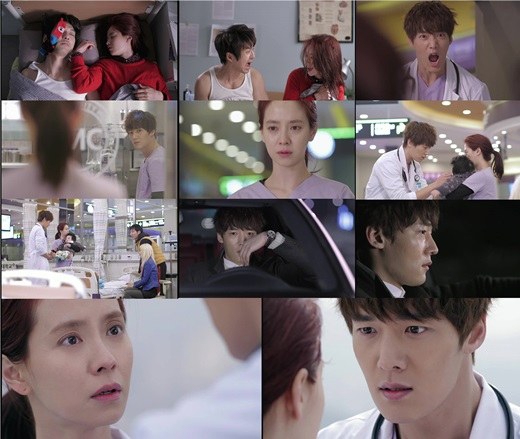 The main conflict this time is kind of dumb. However, it's dumb mainly because the original storytelling device itself is also dumb. Yes, "Emergency Couple" has finally forced its main characters to question the logic of their pretending to be strangers. Pretty good timing too. This kind of plotting goes down much easier on the edge of jokes than it would on the end of a serious dramatic conflict.

Case in point- the whole thing with the baby. It's hard to tell whether the baby is really dying as opposed to just crying. So it's a little difficult to really get worried on that particular subject. Mind, the way Jin-hee's family reacts all around is great. For once it's understandable why the woman is so frazzled and aggravated. Do you want your family to come to your workplace and take advantage of your professional skills? No? Then you can probably identify with why Jin-hee has so little patience for these people.

On the more romantic end of things we've got lots more flashbacks. Not, like, useful interesting flashbacks, just stuff we've already seen before. "Emergency Couple" seems really determined to sell the viewer on the idea Jin-hee and Chang-min being a legitimate couple. The thing is, I can actually believe it in the moment, given the way they act right now. But dredging up flashbacks just reminds me of how utterly unlikable these two were for most of the earlier portion of the drama.

Now, if it's a charming guy we want to root for? I'll take Yong-gyoo any day. The guy's courage is just admirable. Granted part of this is just foolhardiness, since he's somehow managed to convince himself that failure is impossible, but still. I like him. And even Ah-reum has her charms. It's not totally clear why she wants what she wants, but hey, the woman tries to be nice, so I'm willing to take her at her word.

"Emergency Couple" still has enough bombastics that I can't say with much confidence that it's a good drama just yet. But it's making strides and improving all the time, which is immensely relieving. The characters are settling into a normalcy that makes them much easier to relate to, and new story revelations pop up at a reasonable enough clip that the potential is there to at least make me optimistic. The preview has lots of positive indicators here- particularly for the flashback I've been impatiently waiting for. I'm hopeful we're going to get a good delivery on that front.